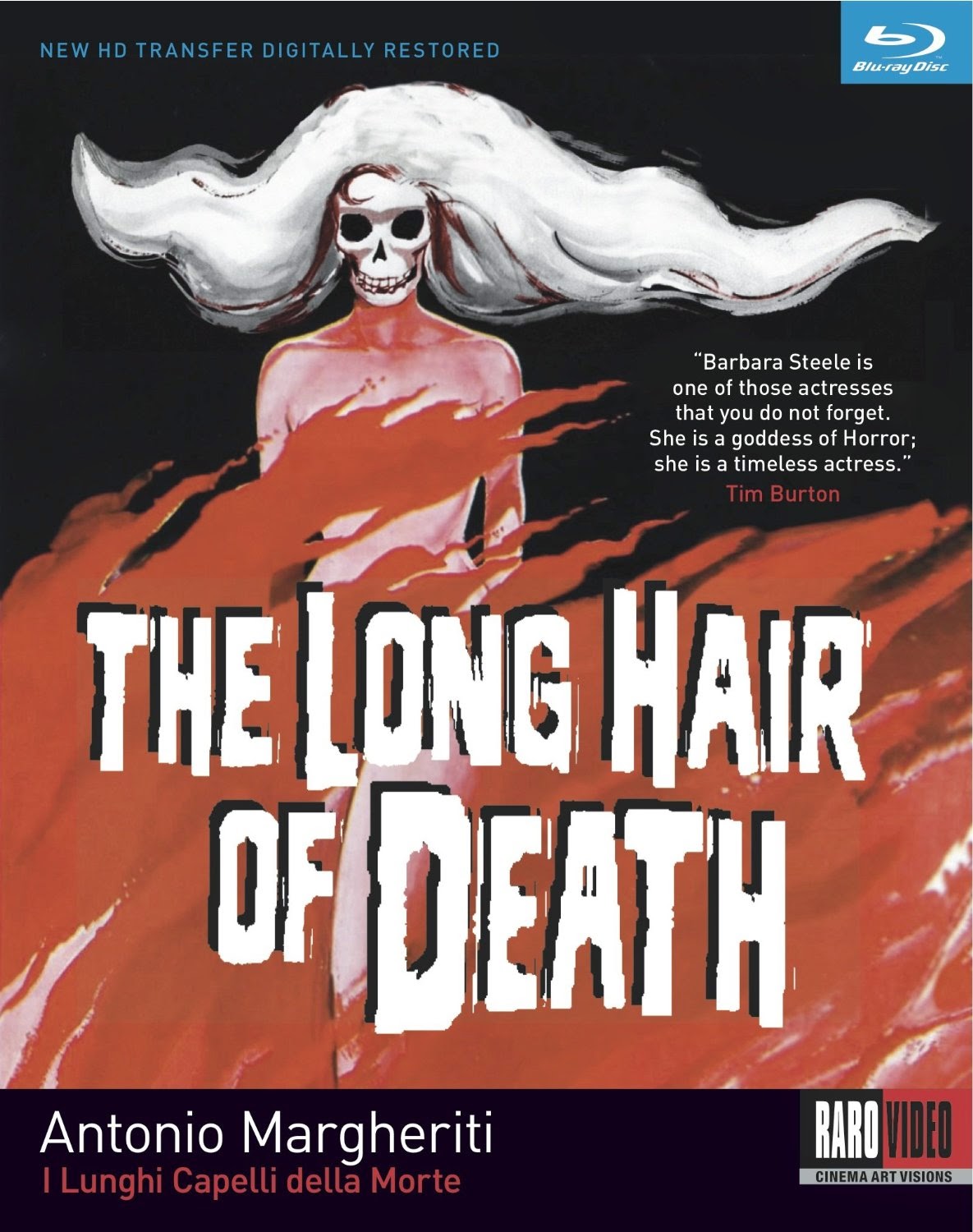 The Film
When a woman is accused of witchcraft in the 15th century, she is sentenced to burn at the stake. Her oldest daughter knows the truth behind her execution and when her sexual advances at her accuser fail and she confronts the man with the truth she too is murdered. The younger daughter, Lisabeth is kept alive and taken care of by the family that killed her mother. About a decade later Lisabeth is forced to marry the Baron until someone baring a striking resemblance to her older sister comes to the castle while a plague takes its toll on the village and the Baron falls for the visitor who reciprocates the feelings. Unbeknownst to the Baron, the woman is Lisabeth's sister returned from the dead and looking to avenge the death of her mother.

THE LONG HAIR OF DEATH was the second gothic horror film that director Antonio Margheriti made in as many years. Following up what could be considered his masterpiece from 1963, Castle Of Blood, this film has been lost in the shuffle of time, probably due to its limited availability in the days of DVD and Blu-ray. That problem is solved with this release and fans of gothic horror can now experience the slow burn nature of the film that ends up being a slowly descending curtain of dread if you will. There are flourishes of violence and visible horror throughout but there's long stretches where the true horror lies in the impending vengeance that our main antagonist is not privy to as the audience is.

The stark black and white photography gives a certain coldness to the castle interiors, and really over the entire film. It fits very well with George Ardisson's icy and heartless portrayal of the Baron. Of course the face of the film is Barbara Steele, as she is in most films she appeared in. She once again has dual roles, and her face seems tailor made for gothic horror. She's brilliant here as she was in the aforementioned Castles Of Blood and in Mario Bava's Black Sunday (1960). Also brilliant is the score by Carlo Rustichelli, who scored Bava's Blood And Black Lace in the same year and would go on to score his Kill Baby Kill in 1967, along with well over 200 other composing credits. There's no need to look further than Rustichelli's score for THE LONG HAIR OF DEATH to see what he's capable of though. The classic orchestral score raises the striking visuals to another level with his pounding strings and brass.

The more I think about THE LONG HAIR OF DEATH the more I like it. I want to give it another viewing before too long. I wouldn't be comfortable putting it on the same level as Black Sunday or Castle Of Blood, not yet anyways. Perhaps with future viewings it will get there. As for now, it's close. And being close to those films means that this is a damn good film. Hopefully the new release of this film on Blu-ray will get a wider audience to discover it and its director.

The Audio & Video
Raro Video's transfer of THE LONG HAIR OF DEATH is presented with a 1.85:1 anamorphic widescreen presentation that largely looks brilliant. The stark black and white photography looks damn good here with deep black levels that have no compression issues and vibrant white levels without burning too hot. Detail is strong with textures and surfaces along with facial close-ups. There's no waxiness to this picture at all and aside from the occasional scene that is a bit softer or has the odd scratch, which obviously has to do with the condition of the source material and not the transfer, this Blu-ray looks as good as you could hope for. Two audio options are available, both with mono tracks. The Italian track is the more natural choice for matching up lines to mouth movements and sounds nice. Dialogue is never lost under the score but the mix is well done so that the music can still shine while complimenting the images on screen. There's no background noise or damage to speak of. Optional English subtitles are available and they're timed perfectly and read well. There's a few very minor errors in translation but nothing that will leave you scratching your head. I only skipped around on the English track seems okay, a bit thinner sounding than the Italian but free of any damage as well.

The Bottom Line
All horror fans should take note of this excellent release of a film that deserves to be re-discovered in 2015 so that it can take its rightful place among the better gothic horror films in history.

THE LONG HAIR OF DEATH is available HERE
Posted by Celluloid Terror (Seth Poulin) at 4:36 PM