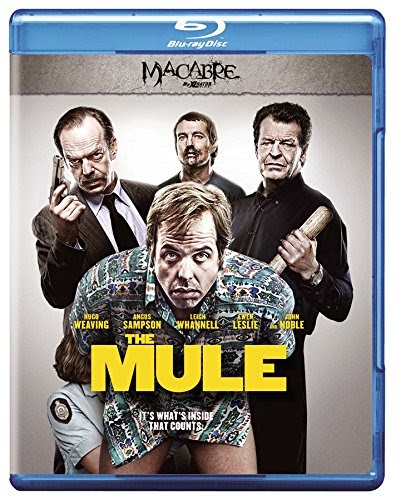 The Film
A man agrees to transport packets of heroin in his stomach but is caught and detained by Australian police while going through airport security. Scared and not knowing what to do the man makes a choice to not defecate which would expose his guilt. The police take him into custody at a hotel and monitor him at all times. The man continues to refuse to defecate and tries to outlast the one week limit the police have to hold him putting his own life and his family's well being in harm's way.

And that's about it. THE MULE is apparently based on true events from 1983 in Australia and maybe the true events were more exciting than the movie about them because THE MULE is about as uneventful as it gets. About thirty minutes into the film we start our escapade at the hotel and very little happens then. We watch our man constantly keel over in stomach pain from holding in his dumps and we watch the cops beat him. The film and it's artwork seem to want to have a comedic tone, which would be extremely welcomed and would work very well but the attempts at comedy are abandoned too quickly and simply aren't funny.

The cast has talent but a weak script and a screenplay, ironically written by Leigh Whannell and Angus Sampson, who star in the film, makes the movie more of a chore than an entertaining experience for the viewer failed any talent the cast has. Not only did this movie let me down, it let itself down.

The Audio &amp Video
XLRator Media releases THE MULE on Blu-ray under their Macabre line with an attractive looking disc. The anamorphic widescreen transfer has nice sharpness while colors are vivid. Detail level is good along and there's no edge enhancement or DNR. The English 5.1 DTS-HD Master Audio track is crisp and the mix is on point. Clarity is good as there's no background noise or damage to the track.

The Bottom Line
THE MULE had potential to be an entertaining dark comedy but the few attempts at comedy fall flat and the rest is just a bore. The best part about this disc are the special features.

THE MULE is available HERE
Posted by Celluloid Terror (Seth Poulin) at 3:22 PM