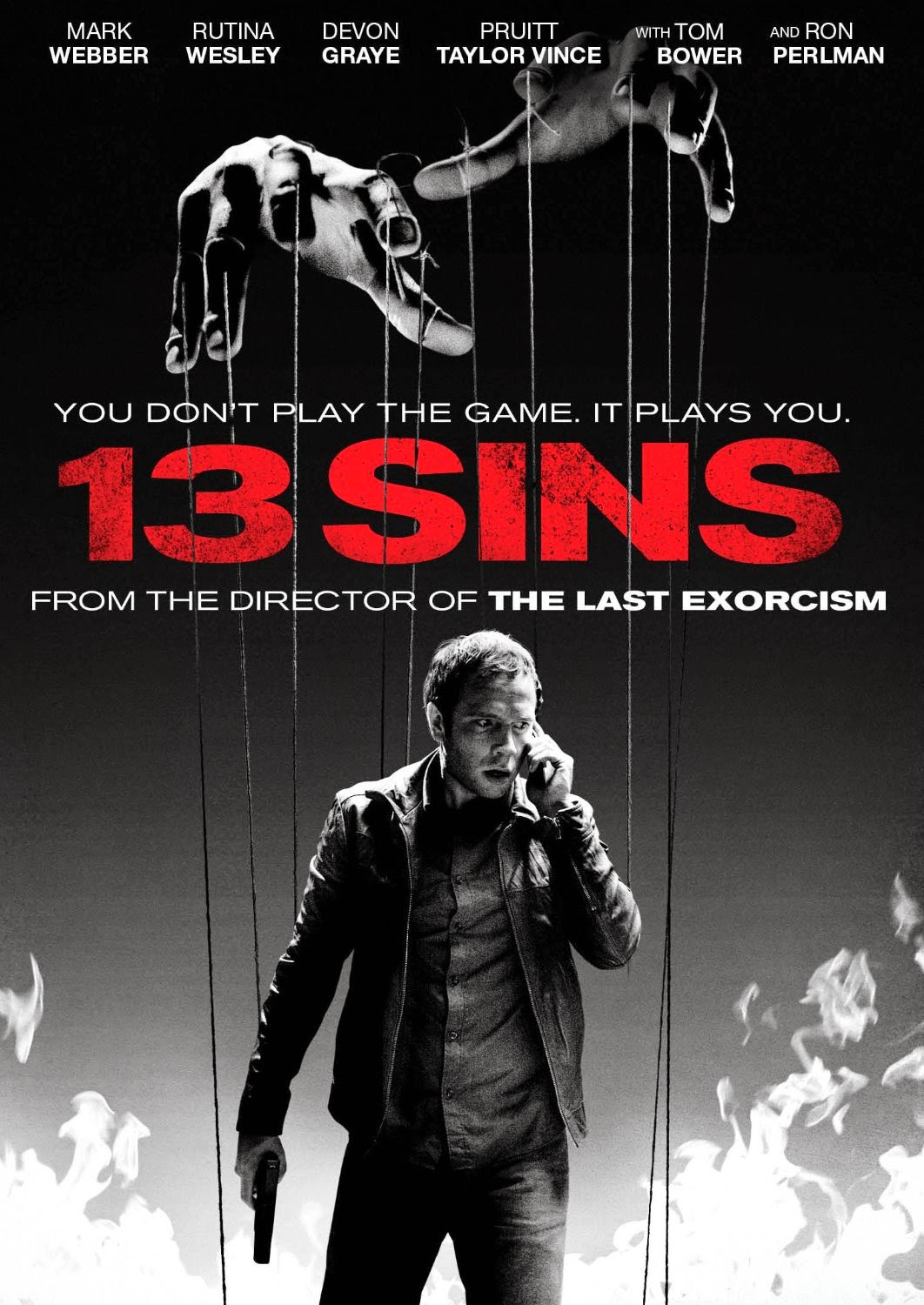 The Film
Elliot is about to marry the love of his life but what should be a happy time is one of stress and desperation due to mounting debt, a special needs brother, and a father who hates his fiancee but needs to move in with the couple. Elliot receives a phone call one night informing him that he has been chosen to be part of a game that, upon winning, would give him a life changing amount of money. The game consists of thirteen challenges, the first is to kill a fly that is pestering him in his car. Upon doing so a thousand dollars was deposited into his bank account, the next challenge, worth a little bit more money was to eat the fly. The catch is that all of the money will vanish if he fails to complete a challenge or quits the game. Elliot's desperation drives him commit serious crimes to complete the game's challenges bringing him face to face with the game's other contestant on the final challenge.

13 SINS is a remake of 13: Game Of Death, A Thai film from 2006. Having never seen the original I can't compare the two but I can say this American remake isn't bad. It has a dark comedic side to it that keeps the mood light through most of the film that allows for us to cheer on Elliot despite some despicable acts. There's a messy subplot involving a police detective hunting down Elliot for the crimes he's committed and learning of the game's ancient origins in the process. It isn't handled very well and eventually just forces it's ways into the main story in a hamfisted manner. The end of the film is the main downer for me however, the final challenge really seems like a case of the writers trying to one up each other by adding more and more twists to the point that it is infuriating. I'm not sure if the original film is like that but shame on the writers of this remake for not changing it if it is.

Directed by Daniel Stamm, who is most known for the extremely large let down that ended up being The Last Exorcism, 13 SINS isn't awful, but manages to get in its own way too often to really be great. Mark Webber is likable and convincing as Elliot and really, the rest of the cast is good too. I usually won't complain about Ron Perlman being in a film but while he was also good in his role, it was his subplot that started making things messy. Daniel Stamm doesn't do anything extraordinary here, he handles the movie capably without much flair.

The Audio & Video
Anchor Bay brings 13 SINS to Blu-ray with a very attractive 2.40:1 anamorphic widescreen presentation. Details levels are strong, along with deep, inky black levels. Skin tones are fleshy and natural. The image is clean and free of any dirt or debris. The 5.1 DTSHD-MA track is loud and clear with a perfect mixing job of dialogue and soundtrack levels. There's no audio hiccups or background noise.

The Bottom Line
Despite any drawbacks the film has it is entertaining and is worth checking out. It would be great during a rainy day movie marathon.