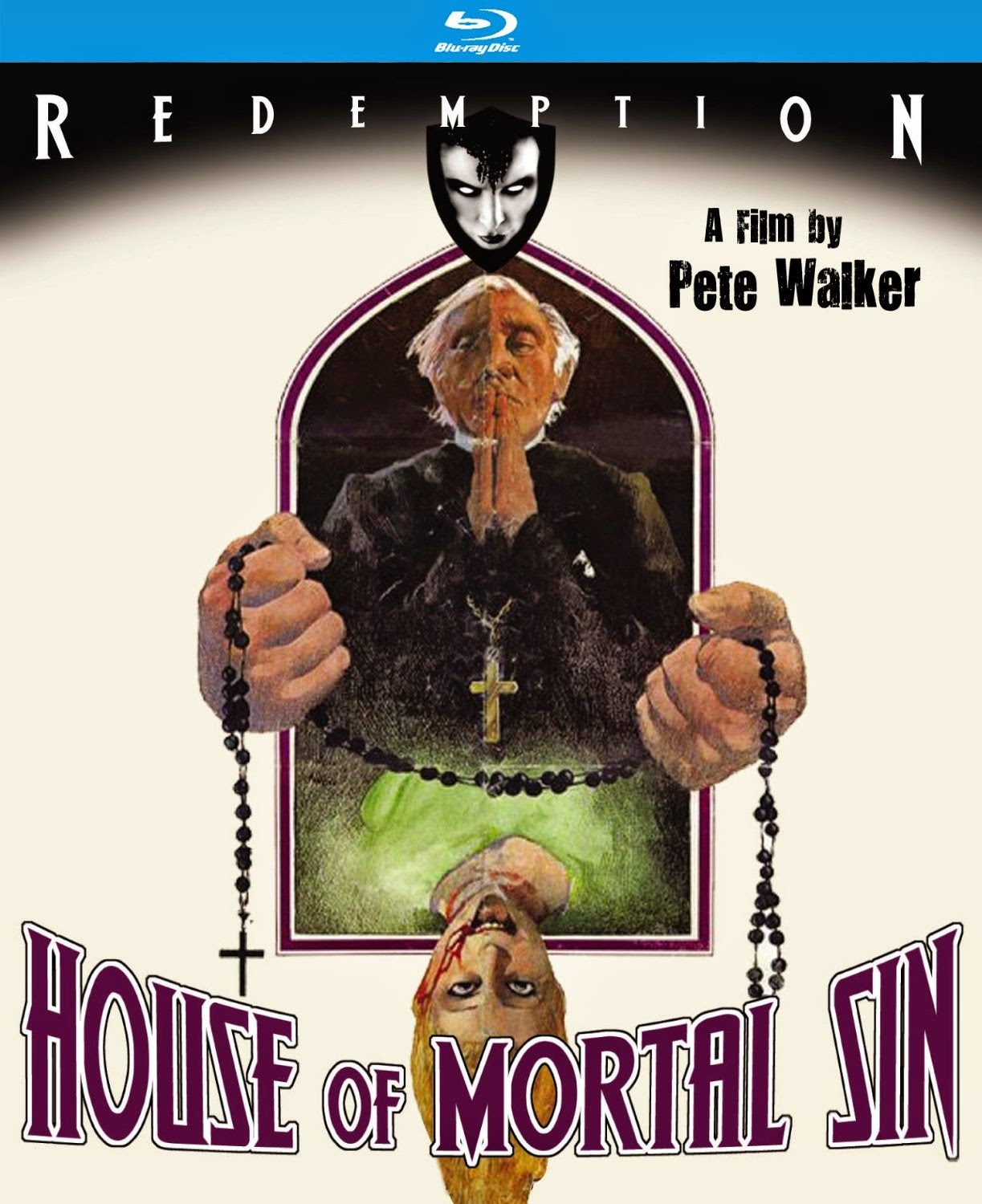 The Film
Anthony Sharp stars as Father Meldrum, a corrupt priest who uses the cover of the church to commit nasty and unspeakable crimes against his parishoners.When Father Meldrum records a confessional by a young girl about her abortion his secret crimes become the interest of the girl's friend, a fellow priest. As Meldrum's streak of heinous acts continues his secret world begins to unravel but will the love and care from a good priest be enough to overcome the reign of terror that is Father Meldrum?

Also known as The Confessional, HOUSE OF MORTAL SIN is one of Pete Walker's most violent and dark films. Inspired by the director's time spent in a Catholic school, Walker depicts the antagonist priest beating, setting fire and poisoning those he doesn't approve of for one reason or another. That is just the beginning of it as Father Meldrum truly is heartless taking out anyone loyal to him if it means being able to cover up. Even a woman who has blindly served him for 30 years just to be around the man she loves.

Walker's direction is straight forward, as it usually is, letting the scenes speak for themselves as opposed stylish direction. HOUSE OF MORTAL SIN is very similar to a slasher film that would overtake the horror landscape just a few years after the release of this film. With Anthony Sharp's excellent performance as Meldrum to Sheila Keith as his lovelorn assitant who is willing to do anything to be with him this film is packed with good performances. Norman Eshley is very much a humanitarian in his role as the good priest trying to conquer the devil that is terrorizing the town. HOUSE OF MORTAL SIN is a blatant commentary of Pete Walker's view on the Catholic church and religion as a whole and it happens to be held within an exceedingly well made horror and exploitation film.

The Audio & Video
Kino Redemption knocks this Blu-ray out of the park. HOUSE OF MORTAL SIN was previously released under the title The Confessional several years ago by Shriek Show and there's no comparison to the discs. While the DVD was decent, this Blu-ray is likely the film has ever looked outside of a 35mm presentation and I'd be willing to bet it's the best it will ever look on home video. Skin tones and colors have a natural and healthy look to them while detail levels are high. The source material was kept in great condition and is very clean. There's a bit of speckling here and there but it isn't distracting whatsoever. The English audio track is perfectly mixed between dialogue and score and sounds very crisp. There's a tiny bit of background noise present but nothing to get worked up over as it is barely noticeable. This disc is really top notch.

The Bottom Line
HOUSE OF MORTAL SIN has become one of my favorite Pete Walker films and this Blu-ray is a damn fine presentation of it. I have no hesitations calling this one essential viewing.