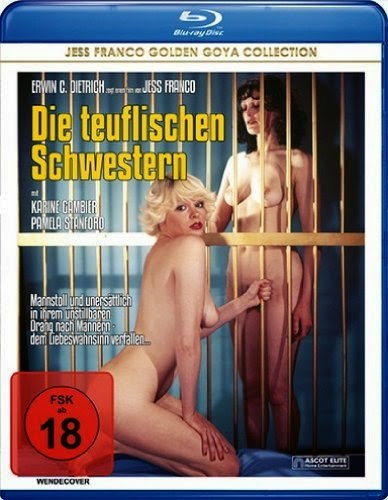 The Film
Edna keeps her sister Milly chained up in her secluded bedroom. Milly suffers from sexual trauma after being raped as child by a large muscular man. Milly may be curable but Edna has no desire to help her sister as she is the sole heir to their father's large fortunes he left for inheritance as long as Milly is mentally incompetent. Edna and her lovers long plot of drugging Milly to keep her in a state of sexual desire, a nymphomaniac will soon unravel and Milly will get what is rightfully hers.

Another piece of sexploitation from Jess Franco. It seems in 1977 that is all the director had on his mind. This one isn't as weird as Blue Rita, and not as boring as Voodoo Passion. SEXY SISTERS lies somewhere in between. At the very least it has a story but then again, it isn't a very interesting one. The entire point of this film is for Franco to show off his beautiful actresses. There's nothing particularly wrong with that but a more interesting movie would certainly have made it more enjoyable.


The Audio & Video
Ascot Elite's transfer of SEXY SISTERS is good, despite being one of the weakest I've seen from their Jess Franco Golden Goya collection. The film is mostly very sharp and detailed with a nice natural look to it. Colors are vivid and skin tones healthy and fleshy. There are instances throughout that are soft and overly grainy. These scenes aren't terrible but they don't hold up to the high bar that Ascot Elite has set for themselves. The English 5.1 HD audio track (the only English friendly option) sounds very good, as usual. It is a full bodied track that is well mixed with no instances of background noise that I could notice.

The Extras
A trailer and photo gallery are the lone extras

The Bottom Line
Franco completists or sexploitation super fans will want to add this disc to their collection immediately. As for the rest of us you'd be better off seeing the movie before plopping down the big bucks to buy it.