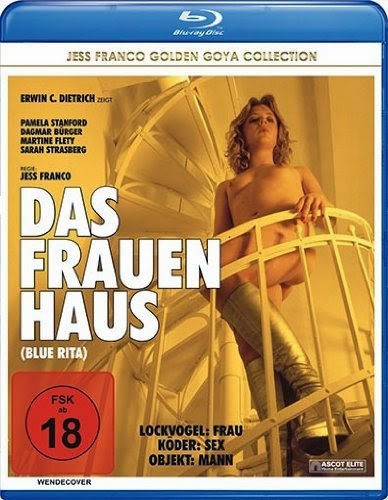 BLUE RITA is not a film that will engross you with it's story. This is purely Jess Franco stroking himself visually. And that isn't a bad thing because BLUE RITA is one of the most visually striking and appealing films I've seen in a long time. Of course there is the group of women who are naked for the duartion, it is like they don't know what clothes are. Beyond that however, are colorful rooms, packed with inflatable furniture, tin foil doors and cellophane curtains. Even the cell the men are kept in is striking as it is below the floor and covered in spikes so the angles the viewers are exposed to are cool.

I have no idea if BLUE RITA was improvised, it certainly could be with the random inclusion of the Eastern Block part of the story. It seems like the movie just skips around getting from one naked lady filled scene or one extravagantly dressed or lit set piece. Franco has done better, but to date I'm not sure he's been so visually striking in any of his films I've seen.

The Audio & Video
A visually stunning film deserves a visually stunning Blu-ray and Ascot Elite has done that. The 16x9 (1.78:1) transfer looks very good. There is a bit of light DNR applied to clean things up a bit but the film still retains a natural look and a light grain structure. Skin tones are fleshy and healthy while the colors are vibrant. Detail is strong as well. The only English friendly audio option is an English dub track which isn't the way I'd prefer to watch it, but it'll have to do. Some of the voice acting is crappy to say the least. The quality of the audio itself is quite good however. There's virtually no background noise and the DTS-HD 5.1 track is full bodied, and crisp with excellent mixing on the levels.

The Bottom Line
A bizarre mix of exploitation and art house, BLUE RITA ends up being something very distinct. I haven't decided if I'm a fan of it yet but I certainly won't be forgetting it any time soon. If you're inclined to check out the movie this disc is the way to do it.