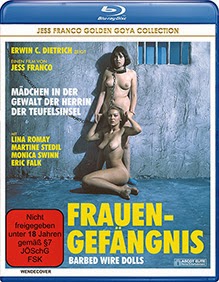 The Film
Lina Romay stars as Maria, a woman thrown in to the nasty women's prison after murdering her father who tried to rape her. Maria is exposed to the despicable warden and her guards, the lesbian inmates and the various forms of torture lying within the walls. Eventually Maria plans an escape with her cellmates leading to a chase through the jungle exteriors.

BARBED WIRE DOLLS is a mean spirited film. All of the prisoners are badly mistreated physically, sexually and mentally. Monica Swinn does a great job at playing a warden that would give Ilsa a run for her money. BARBED WIRE DOLLS is pretty much an exploitation fan's wet dream.

The Audio & Video
Ascot Elite's transfer of BARBED WIRE DOLLS is top notch. The picture is sharp, colors are vibrant and there's a healthy grain structure while skin tones are natural. The English 5.1 DTS-HD track sounds great. It is nicely mixed, and free of any audible disturbances. There is also English subtitles for the German language track.

The Bottom Line
Jess Franco fans will find a lot to love here, especially with the performance from Lina Romay. In broader terms, any sleazy film fan will be doing a disfavor to themselves if they don't at least give BARBED WIRE DOLLS a chance and this Blu-ray is the best way to do so.