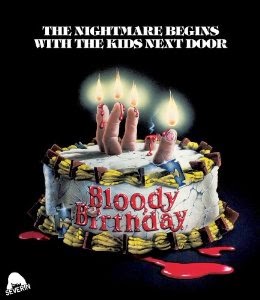 The Film
Three kids are born in the same hospital just minutes apart during a planetary eclipse of the sun. Ten years later these kids have grown up in the same neighborhood as best friends and are growing into manipulative, maniacal little shits. Their bad behavior quickly turns murderous as they start dispatching of anyone they feel inclined to kill. Another neighborhood boy and his older sister who is into astrology begin to catch on to the pattern of violence destroying their neighborhood and the older sister realizes they may be missing their conscience as a result of the astrological even they were born under so that they feel no remorse.

BLOODY BIRTHDAY was born at the start of the slasher film craze which makes it a bit less gory than many films that would follow it in subsequent years but that doesn't make it any less mean spirited and violent. Shootings, poisonings, arrows, and bludgeonings are just some of the ways that these little pre-teen brats kill. The little girl who is the leader of the group looks plain evil, and really the entire cast of kids and Lori Lethin are excellent. Hell the movie even features a pre-MTV Julie Brown. BLOODY BIRTHDAY may not be regarded as a "top tier" slasher film like Friday The 13th but it is still a breezy hour and a half of entertaining horror that gets better every time I watch it.

The Audio & Video
Severin Films gives Bloody Birthday a rather nice looking HD presentation. The 16x9 transfer is pretty clean, with just a bit of speckling and a few scratches. Colors are warm and vivid while skin tones are natural and healthy. The audio track is good as well. It is crisp and well mixed with no background noise.

The Bottom Line
BLOODY BIRTHDAY isn't the best or most notable slasher film of the 1980s but it is a damn entertaining film about some bastard kids and stands the test of time from the glory days of the slasher.