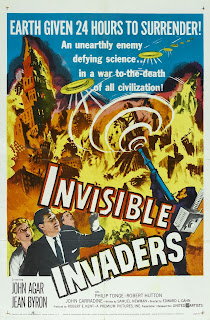 Day 14 starts with INVISIBLE INVADERS which was a rather familiar and typical martian invasion horror movie from the 50s. These moon men have demanded Earth's surrender and because they're invisible they inhabit the bodies of recently deceased humans to terrorize Earth to get their way. John Agar stars as one of the scientists in charge of finding a way to stop the invaders and he's always a nice addition to these cheesy sci-fi casts. I had enough fun with this one and there's some memorable moments, mostly involving the zombies, but it isn't anything groundbreaking. If this is the type of movie that speaks to you I highly recommend it otherwise it's fun for a rainy Sunday afternoon. 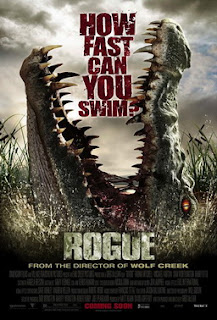 Greg McLean is the closest thing we have to Ozploitation these days with his Wolf Creek films and the movie I watched nearly a decade after becoming interested in it -ROGUE. This giant killer crocodile film is set on a scenic river in the Australian wilderness where a tour boat enters an off limits area to respond to a flare that was sent up and that's when they encounter the super aggressive 30 foot croc that sinks their boat and strands them on a small island that disappears with high tide. With only hours to figure out a plan before they're stuck in that water with the croc tensions rise, people get eaten and people act like dickheads. It's a lot of fun to choose sides from the comfort of your chair and cheer on the good people in the group while hoping the croc munches on the more annoying characters like Koboyashi at a hot dog eating contest. Yes, I know Koboyashi hasn't held the world record for hot dogs in a decade but that was reference was funnier than a Joey Chestnut reference. The movie stumbles a bit in the last 20 minutes when we enter the croc's lair but ROGUE proves there's plenty of life left in movies we've seen dozens of times before when it's done with skill. 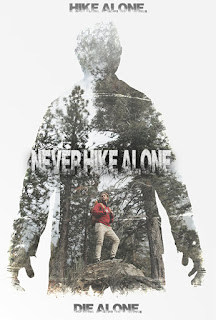 The Friday The 13th fan film by director Vincente DiSanti NEVER HIKE ALONE is probably the best fan film I've ever seen. This is a fan film that looks like a studio production if the F13 series took a bit of a found footage turn. This movie breezes by at just over 50 minutes and it's a perfect runtime for this movie that follows hiking enthusiast and vlogger Kyle as he stumbles upon the remains of Camp Crystal Lake and Jason Voorhees. Slickly shot, well acted and featuring some well done practical special effects I don't have much bad to say about the movie until the last few minutes that felt like unnecessary fan service meant to get a cheap pop from the audience and add to the body count. There's nothing wrong with the way that it's done except that it really adds nothing to the movie. It's a minor gripe on an otherwise stellar fan film that fits in perfectly with the franchise.
Posted by Celluloid Terror (Seth Poulin) at 5:51 PM

Don't have anything to say about the first two, but I agree about Never Hike Alone. It was so well done, all around. Want more fan films of this quality, and more from this director.