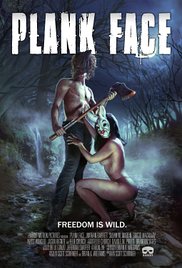 A few years ago Scott Schirmer created waves in the horror community with his super gory and fucked up horror film Found which I had mixed feelings about. It was definitely violent and gory and didn't care who it offended. The biggest let down for me was the acting which was pretty rough in spots. Today I watched his most recent release PLANK FACE which again goes for the throat with a violent backwoods horror film about a feral family that captures a man and leaves his girlfriend for dead and torture him and try to force him to join their clan. And that's the problem I have with the movie. The movie looks great, the performances are good and the special effects are good but I'll be damned if that man didn't go from modern 21st century man being held captive and tortured to totally giving in and devolving to this feral wild beast of a man. It happens so fast that it really ruined all of the things I liked about it. 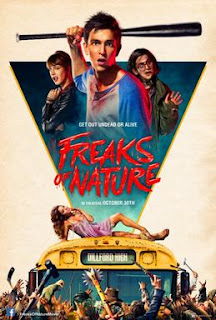 From a disappointment to a pleasant surprise in FREAKS OF NATURE. This is a lighthearted, coming of age, horror comedy full of vampires, zombies, humans and aliens. Oh, and splatter. Lots of splatter. And riblets. And Dennis Leary, Patton Oswalt, Joan Cusack and Vanessa Hudgens being sexy. All of those actors are in supporting roles and are fantastic. Our leading trilogy Nicholas Braun, Mackenzie Davis, and Josh Fadem have great chemistry. This movie is genuinely funny, charming and a great time dealing with high school life, shitty chemical food and aliens. Those asshole aliens. Learn to co-exist with your neighbors, even if they're zombies or vampires. Being a vampire isn't so bad. Imagine a The Breakfast Club getting tossed in to The Monster Squad universe and you'll get an idea of what's going on. 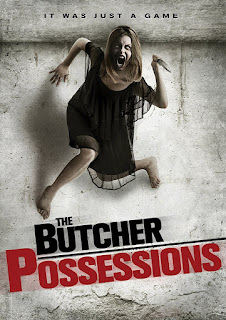 The day ended with THE BUTCHER POSSESSIONS, originally titled Beckoning The Butcher which is a much better title even if it makes little difference since we never see "The Butcher" or find out anything about it. The movie centers around an amateur ghost hunter vlogger who has just found a ritual online called Beckoning The Butcher that he's anxious to try so he rounds up his friends and they head out to a secluded house in the desert and try it. Of course it works and his friends end up possessed and disappear. Cut in about 20 minutes of interview footage with family members and people associated with the case and there's only about 50 minutes of actual movie and it's all pointless. These Paranormal Activity style minimalist have-nothing, do-nothing horror movies are so fucking boring and pointless and I wish they'd end. This movie isn't even that awful from a more technical point of view but this style of horror movie is bottom of the barrel crap and always will be. I wish filmmakers would invest their money in making something other than this found footage junk.