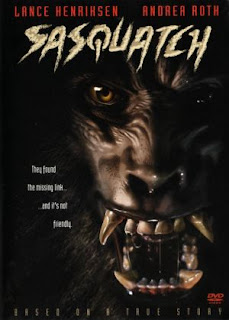 Most Bigfoot movies suck. The world needs more quality Bigfoot movies. In an effort to find fun movies involving the legendary creature I've come across some trash and it happened again with 2002's SASQUATCH starring Lance Henriksen. How bad can a Lance Henriksen be, right? Well he's not too bad but the rest of the movie goes over like a wet sasquatch fart in a crowded elevator. The Sasquatch suit is laughable looking like black pleather with a bit of fur randomly glued around. His face looks okay though. The only scene worth a damn involves pleather Sasquatch fighting Lance Henriksen with a tree stump. Otherwise the acting sucks, the characters are grating and the effects remind me of a shitty episode about ghosts from Unsolved Mysteries. And for the record Unsolved Mysteries rules but SASQUATCH certainly does not. 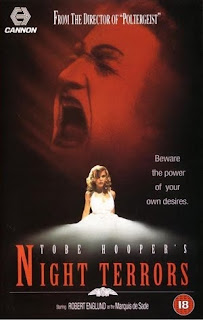 The suckage continued but this time it was a much bigger let down with Tobe Hooper's NIGHT TERRORS starring Robert Englund. I like Hooper and Englund a lot and their previoius collaboration Eaten Alive is fantastic. Sadly this collaboration is poorly realized. Englund plays a dual role as the Marquis de Sade and in present day as a descendant of the Marquis. When he's the Marquis he spends his time chained in a dungeon being tortured and whipped in shitty makeup and hamming it up way too much. The dungeon looks damp and dark and is my favorite part of the movie but I don't think I've ever liked a Robert Englund performance less than this. As his present day character he's still over the top and irritating. The rest of the cast including Zoe Trilling and Alona Kimhi are perfectly suited for day time soap operas with the range of a 2x4. The cult scenes are bland and everything about it felt like they didn't have the money to really produce what they wanted. At least it was better than Sasquatch. 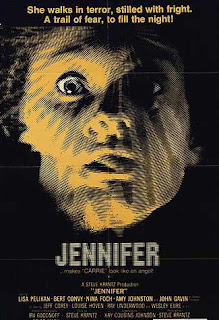 The day wasn't a total loss... JENNIFER is an entertaining ripoff of Carrie. Jennifer is a new girl at a private school where money is all that matters. The rich kids have all the privilege over the scholarship kids and most of the popular girls give Jennifer all sorts of shit for no real reason even though she's a perfectly nice and kind person who isn't even all that weird despite having a father deeply devoted to the bible and Jennifer's past involving the deep south snake churches where she was able to control the snakes and had "the power". He pesters her about the bible and the snakes and his dinner but never really comes across as the psychological threat that Piper Laurie did in Carrie. Eventually they fuck with Jennifer too much and she loses it, reverting back to her Godly snake powers and punishes her tormentors. The movie is a bit of a slow burn and makes you sit around with a lot of spoiled bratty girls that deserve everything they get which makes it all worth it even though it's not the most exciting or expertly crafted film in the world. I think this could have been some serious 70s exploitation gold had they made this trashier and more violent with the snakes instead of trying to compete stride for stride with Carrie and keep a sense of "class" about it.

Yeah, the Bigfoot movies are hard to get through. Did you ever see the one with Barry Williams aka Greg Brady? Oy. Might check out that Jennifer flick, though.