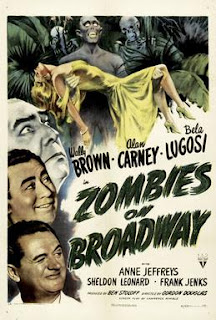 Have you ever watched a movie for the first time (presumably) and thought "wow, this is all really familiar to me."? That's the case with ZOMBIES ON BROADWAY for me. I don't vividly remember watching this before but it all felt so familiar that maybe I have and just don't remember and haven't found any record of it. Either way it's an entertaining comedy romp as a comedic duo who wishes they were Abbott and Costello are forced to go to an island to find a real life zombie to debut at their mob boss' new nightclub. They find a gorgeous blond singer to bring home along with a lot of stories of voodoo zombies, mad scientists and haunted houses... It may sound better than it is. It's decent but some of the comedy falls flat and the horror side of things, including Bela Lugosi's performance is all too silly and easy even for its time. 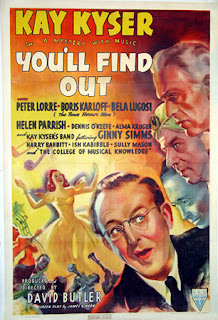 If you're wondering about Zombies On Broadway well then... YOU'LL FIND OUT! YOU'LL FIND OUT is horror, comedy, musical mashup featuring a starring role from Kay Kyser who was a big band leader and famous radio personality in the 30s and 40s. This is a murder mystery haunted house tale featuring performances from Bela Lugosi, Boris Karloff, and Peter Lorre, what a trio. They're all quite good and the movie lives up to the legendary trio's performances. I wouldn't call it anything new or special but it features some solid scares and chills in typical 40s form. The film relies too much on Kay Kyser and his musical performances to the point that it almost feels like advertisements for his program at times ("Do you know who that is? It's Kay Kyser!") and it definitely pads the runtime but when the movie is left to be a chilling horror picture it is pretty decent and certainly elevated by our legendary trio. 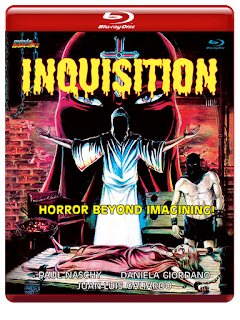 Then there was the directorial debut of Paul Naschy, INQUISITION. A phenomenal witch hunting religious horror film filled with gore, nudity, sleaze and a leading role from El Hombre Lobo himself, Paul Naschy. Naschy had starred in dozens of films before he got to direct one but he certainly proved to have picked up on the craft. INQUISITION feels like a cross between the Roger Corman films that starred Vincent Price and the Euro sleaze that was all the rage across the European horror scene in the 1970s. I loved this and would put it among my favorite Naschy movies. Naschy does his best Witchfinder General impression while being the sleazy sex pot we know him to be. There's a bit of plague gross out, supernatural horror, despicable humans, and really solid filmmaking. It has a gross out factor, a bit of a downbeat tone even though we're given perfectly fine antagonists to cheer for, and a skin factor that only the 70s could provide. The blu-ray from Mondo Macabro is far from perfect but its quite attractive at its best and decent at its worst with the scale tipping toward the better side of things.

And we finished off with the short film by Pete Tombs of Mondo Macabro and Andrew Starke, which was an episode of their Eurotika series, Blood And Sand, a documentary short about the history of Spanish horror. I think it is far from definitive but it does provide a nice timeline of notable films and film characteristics. Any newbie to Spanish horror will benefit from watching this short film.
Posted by Celluloid Terror (Seth Poulin) at 2:51 AM

This Naschy treasure has all the right euro-sleeze horror elements! I have every Naschy horror movies on DVD and Inquisition is a real standout, now working on the Blu rays. Your so lucky to get that special Red edition to review! Great Blog and You Tube review, keep up the great work.