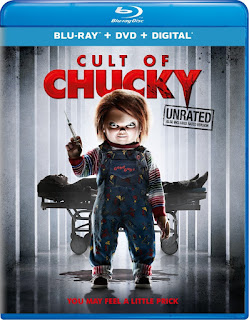 The Film
Following the events of Curse Of Chucky Nica has been blamed with the deaths of everyone and has spent the last several years committed to a psychiatric ward. Now she has been put in a lesser security facility to continue her improvement but quickly things take a turn for the worse when the doctor introduces a Good Guy doll to the group therapy sessions as a tool and Tiffany Valentine shows up with a Good Guy of her own informing Nica her niece has passed away and left it to her. Toss in a dash of Andy Barclay and a third Good Guy doll and all hell breaks loose inside the hospital. 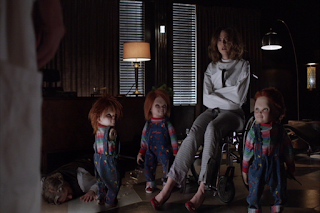 Four years ago Curse Of Chucky brought the Child's Play franchise back to its horror roots and was a pretty solid movie. CULT OF CHUCKY continues the revival of the series breathing some fresh ideas into the franchise while remaining a familiar Chucky movie that old fans will love. CULT brings in the some of the most violent and definitely the goriest death scenes we've seen out of the entire series while retaining the dark sense of humor that lets Brad Dourif's perfect voice work shine with Chucky's quippy asshole personality. Director Don Mancini makes great use of having multiple Chucky's running around and their interactions with each other are hilarious and exactly what you'd hope for. That is my favorite part of the film.

The cast, lead by Fiona Dourif who has returned as Nica, is great. She plays a great heroine stuck in an impossible situation fighting against multiple enemies including an abusive asshole doctor (Michael Therriault). Jennifer Tilly shows up for a handful of scenes and is effortlessly sexy and funny while maintaining her diabolical menace. The hospital setting is eerily sterile and somewhat claustrophobic as well. The blindingly white walls that surround the characters, including a snow covered exterior setting make for a beautiful background when the blood starts to fly and those white walls are a strong juxtaposition against the dark and heavily decorated office of the head doctor. CULT OF CHUCKY has a great design. 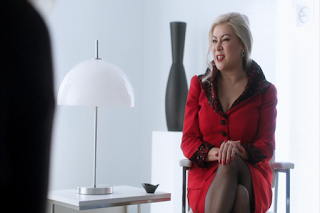 There's some things in CULT OF CHUCKY that don't make a ton of sense, mostly involving the multiple Chucky angle but it's easy enough to look passed that and simply enjoy the movie. It's violent and funny and funny and violent and sets up a couple different angles that the franchise can move forward with that would be a lot of fun to see play out. After Seed Of Chucky the Child's Play franchise was on life support but back to back films that bring the film back to its roots have it on the upswing and it's good to have Chucky back because I am a fan of this franchise and seeing it set up for continued success this deep in to its run is something I wouldn't have expected a decade ago.

The Audio & Video
As you'd expect, the Blu-ray release of CULT OF CHUCKY looks and sounds fantastic. Universal has given the film a 1.78:1 anamorphic widescreen transfer that has incredibly strong detail from the fabrics and plastics of the Good Guy dolls to skin tones and hairs that you can count the strands. The color palette features bright, sterile whites which allows the blood reds to pop even more. The English DTS-HD Master Audio 5.1 mix sounds phenomenal. The mix between dialogue and music is perfect and robust. Everything sounds crisp and perfectly clear with no background noise or distortions. 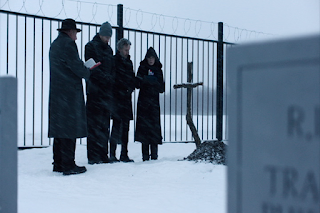 The Extras
-Audio Commentary with writer/direction Don Mancini and head puppeteer/producer Tony Gardner
-Deleted Scenes with optional commentary from Don Mancini
-"Inside The Inanity of CULT OF CHUCKY" - Behind the scenes featurette
-"The Dollhouse" - Cast and crew featurette
-"Good Guy Gone Bad: The Incarnations Of Chucky" - Featurette on the puppeteer work of Chucky 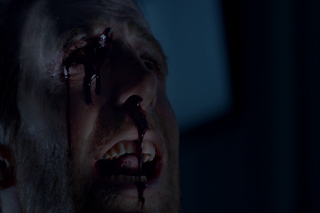 The Bottom Line
CULT OF CHUCKY is every bit as good as Curse and after these two films I'm back on board with the series after the trash that was Seed. It's scary and violent and perfectly funny in all the right spots. Flawed sure but a lot of fun and good enough to have me craving more of the Chuckster.