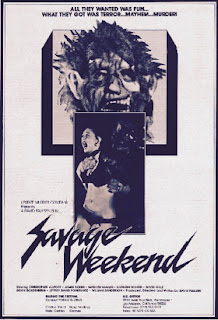 Today started with SAVAGE WEEKEND a movie I've gone back and forth thinking I've seen before. Well I hadn't. I don't know what I was thinking of but it wasn't this movie. SAVAGE WEEKEND is a sleazy backwoods slasher with some dull characters aside from William Sanderson who plays Otis and is fantastic in the role of an irritable, dumb as dog shit handyman. The movie has a few exciting moments but is a bit dull in the moments between them. The reveal of the killer isn't as clever as the movie thinks it is. It's okay but for a movie so sleazy it's hard to believe it wasn't more exciting. 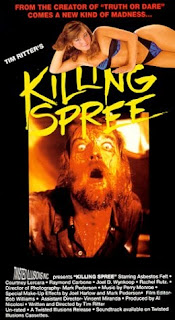 The movie of the day was easily KILLING SPREE from Tim Ritter who is one of the kings of shot on video horror and he doesn't disappoint here. A hardworking man is getting crapped on at work, bills are piling up and now he finds out his wife is sleeping around with everybody that shows up at the house. He decides to get his payback and kill off every person she has written about in her diary in extremely gruesome fashion. The movie is good enough at this point for cheesy shot on video splatter fun but it became something really special when pure madness breaks out and the bodies return looking for their revenge. Campy as fuck, gory as shit, and hilarious at times as well. Loved it. 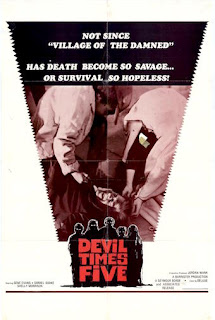 DEVIL TIMES FIVE wrapped up the day - an effectively creepy killer kids film. A group of kids and a nun survive a car wreck in the snowy mountains and trek to a secluded house inhabited by a wealthy businessman and his crew of associates on a vacation when the bodies start piling up the adults start to wonder about these strange children. This movie is fun because you can cheer for the children as just about every adult in this movie is an asshole aside from Ralph the caretaker. The child actors are solid and each has their own personality that works in a group setting and no two kills are the same. I wouldn't call it a classic but it's a worthwhile entry into the killer kid genre.
Posted by Celluloid Terror (Seth Poulin) at 12:36 AM