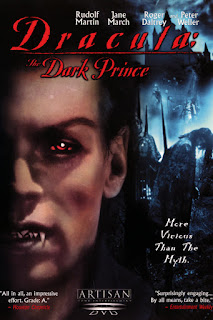 Vlad The Impaler was an infamous ruler and anyone even slightly familiar with his story would agree that a movie based around him could be a wildly entertaining horror movie. Or it could be a really choppy and slopped together TV movie such as DRACULA: THE DARK PRINCE. I'll give credit where it's due; the movie looks fantastic and there are glimpses of that insane violence he was known for and  the but the writing sucks, and the breaks for what I assume were originally commercials have this thing all over the place. It goes from one scene to another set years apart without any warning. If you're a giant geek for all things Vlad Tepes then maybe, maybe you check it out. Otherwise I suggest finding something better. 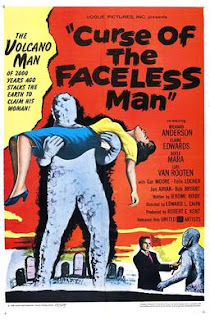 And that something better could be CURSE OF THE FACELESS MAN. This is a pretty standard 50s creature feature with a monster freshly released from his burial in the ashes and ruins of the eruption of Mt. Vesuvius. The monster of a man has been encapsulated in this crust that covers his entire body and though he's blinded he has a sense that draws him to our leading lady who may be his lover reincarnated and he'll stop at nothing to get to her, killing anyone in his way. Is it something groundbreaking? No. It's a pretty standard mummy/gill man type creature feature but it's well made, the acting is good, has an original ending and it's just a fun time. 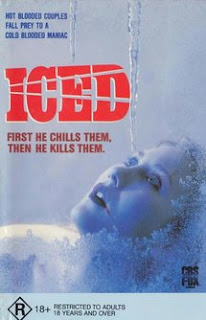 Someone needs to release ICED on Blu-ray ASAP. This movie is so stupid that it made me laugh continuously. "You invited a dead man!" "And he accepted..." - Best part of the movie. The only acting in this movie is overacting. It's a slasher set in a ski resort and we have enough of a body count to keep it from being ALL unintentional laughs but this is like going to The Melting Pot for dinner... it's all about the cheese.
Posted by Celluloid Terror (Seth Poulin) at 4:52 PM