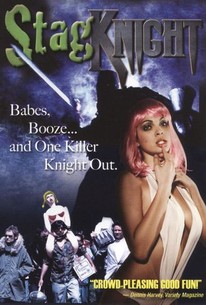 Sometimes your love for medieval shit and boobs makes you buy shitty movies at the flea market for a dollar. I mean STAG KNIGHT is about a vengeful Knights Templar and the cover of the DVD screams "Babes, Booze, and one killer knight out!" I love babes, booze and puns so I plopped down a buck and just found out that unsurprisingly it isn't good. Hell they even found a way to piss me off about my love for paintball in it too. I guess it was better than Clownhouse but there were no boobs, and the killer knight was wack. 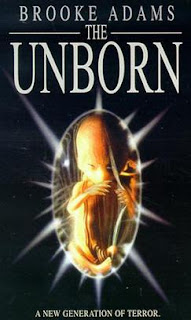 THE UNBORN was next and thankfully it was better. This slow burn horror thriller centers around a couple that has visited a new doctor after years of unsuccessfully trying to conceive but as the pregnancy progresses strange things start to happen and the mom-to-be finds out that this is not a normal child she's carrying. Around the hour mark I was on board with it but it could have easily went either way but I was totally sold after *SPOILER the baby stops breastfeeding, grabs a knitting needle and shoves it into its father's eye after hearing him call it hideous. *END SPOILER. This was the type of wacked out mutant baby type shit I was hoping for. Overall it wasn't a masterpiece but the slow burn was satisfying and I dug it. 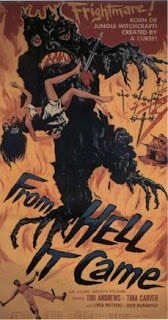 A creature feature can be good in a number of ways. It could be a genuinely scary and well made film or it can feature cheap schlocky thrills and laughs or it can feature a fishman with hotdogs hanging out of its mouth. In the case of FROM HELL IT CAME it's some sort of combination of both... cheap schlocky thrills and a wacky monster design. The monster in question here is a native to a Pacific island tribe that has been wrongfully executed and vows revenge on those that betrayed him. He returns in the form of Tabonga, a big lumbering tree man who throws his victims into a quicksand pit. Once you get beyond the American scientists acting like they're God's gift to the world (especially this Island) and you get to the tree man stuff it's a lot of freaking fun. I mean the last 20 minutes of this thing are perfect B-movie creature feature cheese and I had a blast. The first 50 were boring and fail at being a pseudo-intellectual warning of radiation and atomic and hydrogren bomb usage (a popular theme for science fiction and horror films of the era) but the end is totally worth it. 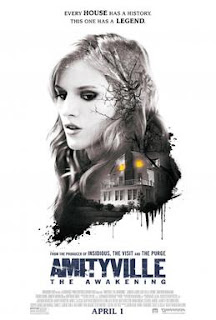 Few series have as many entries as the Amityville Horror franchise. To be honest I'm not much of a fan of the original. I find it to be just "okay". I much prefer Part 2 for taking the prequel story in a sleazier and more exciting direction. I even prefer Part 3 over the original for allowing itself to be a cheesy haunted house type affair. After those three I haven't made much of an effort to check out the series in recent years as most of my memories of catching various sequels on cable or in rentals from the video store are not good ones. So my interest in seeing one of the most recent entries, AMITYVILLE: THE AWAKENING, surprised me and I chalk it up to having a decent cast with the film starring Jennifer Jason Leigh and Bella Thorne and was directed by Franck Khalfoun who helmed the Maniac remake that I once held in quite high regard (it hasn't held up to multiple viewings). So with a chance to see it for free On Demand I figured no better time than now and pressed play. And by the end of it I had a couple of thoughts. One was that at least it looked decent. Nearly 20 entries in and they at least tried to make a decent movie here which surprised me but more importantly I thought "yeah, I think I'm good on this series". Honestly there's just not a damn thing going on here. An embarrassing attempt at making this movie meta and tie into a real world version of the original two films goes nowhere and there's characters who just disappear. The story takes almost the entire runtime to even attempt to get scary aside from a couple of random shadows or doors shutting on their own and the whole idea of the brother waking up from a coma is a wasted effort. The whole thing is a wasted effort really. Yet somehow I don't think I was let down because my expectations were that low.