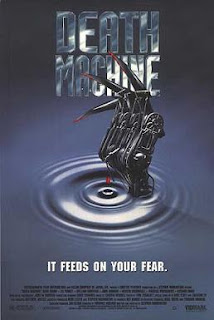 Day 5 started out with something that had all the potential in the world to be a gem of the video store shelves but instead didn't live up to its potential. DEATH MACHINE is a 1994 sci-fi horror film starring Brad Dourif as a genius weapons tech designer who has just been fired for his problematic behavior and is now hellbent on revenge unleashing on of his newest creations on his former boss and a group of thieves looking to steal some futuristic weapons. The scenes of this robotic killer that reminded me of the Mousers from the Teenage Mutant Ninja Turtles cartoon except much bigger are chaotic and cool. Brad Dourif is appropriately over the top and the whole movie has a cheap 90s charm to it but there's just too much wasted time bullshitting around and too little death machine in DEATH MACHINE. 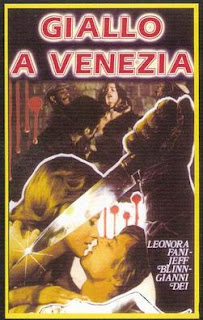 My first giallo of the month will not be the last but it will almost certainly be the sleaziest. GIALLO IN VENICE was made in 1979, several years after the glory days of the genre and you can tell that they were more interested in making a horror influenced giallo than a murder mystery built around story and style. The film is filled with rape, questionable sexual situations, piles of violence (much of which is sexual), and plenty of blood. The story isn't the greatest and it is far from a top tier entry in the genre but I certainly enjoyed it. 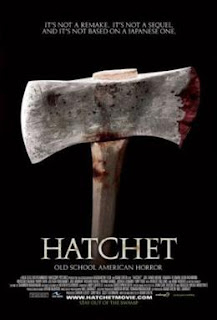 My last viewing of day 5 was for a favorite of mine that I didn't have to pay close attention to at that moment - HATCHET. I've talked about this one many times over the years so I don't need to be longwinded. It's funny, it's filled with great kills and I love everything about it. 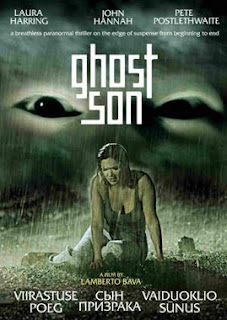 The first movie of day 6 is going to be a strong contender for the worst movie of the month and I have to say I'm honestly not at all surprised. GHOST SON has an awful title, a plot that doesn't even sound exciting (a woman thinks her dead husband is possessing her newborn son's body) and is a modern Italian co-production which really isn't a good sign these days but Lamberto Bava directed it and I am a big enough fan of his older films that I had to at least give it a look. I regret it. This was 97 minutes of absolutely fucking nothing. The baby doesn't even show up until halfway through but it's not like it gets exciting at that point. The most exciting it gets is when the newborn baby is breastfeeding and the mom gets bite marks from it making her think it's her dead husband possessing the baby or something. I don't know. It doesn't fucking matter. It's more melodramatic than a soap opera but not as interesting and is barely masked as a horror film. I don't even have an idea of what they thought would be the point of this thing. 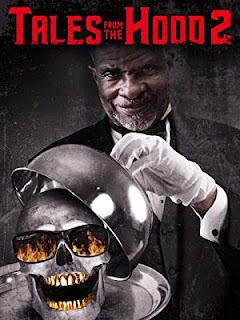 Thankfully the day rebounded with TALES FROM THE HOOD 2. This is a sequel that's been long talked about but after over twenty years I had serious fears that it would be nothing more than a cheap cash in and lose all of the punch, fun and social relevance of the original. I am happy to report that none of that is the case. While it is noticeably lower budget than the original it minimizes the typical shortcomings of direct to video releases like uneven performances and cheap effects keeping those moments to a minimum. Keith David is diabolically funny in the wrap around segments and there's a nice mix of stories and themes to make sure every chapter stands on its own feet. After all these years it seems like 2018 is actually the perfect time for this film to exist and even when the social commentary is at its heaviest it doesn't from the film's surface entertainment level. I'm glad this one turned out as well as it did.