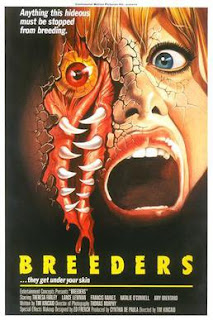 BREEDERS was a spur of the moment decision when I stumbled upon it on Comcast's free On Demand listings. and one I'm glad I decided to watch. This is total 80s trash that is filled with T & A and silly gore. It's a 75 minute movie about women in New York City getting raped by slimy alien creatures and are reproducing in the subway tunnels. Is it great? Nope. Is it art? Nope. Is it fun? Yeah, it's good fun. 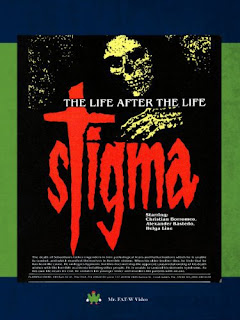 Another day and another disappointment from Jose Ramon Larraz... what is going on? At least I didn't hate Emma but I sort of hated ESTIGMA which is a dire bore about a teen boy who believes he is committing violent crimes telekinetically without any control of his own because it all ties back to fucking his sister and killing her in a previous life. If this thing wasn't so boring it has a sleazy set up that I'd normally be a fan of but it's just such a damn bore. 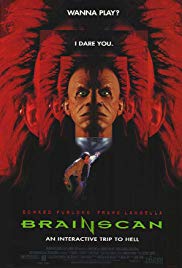 BRAINSCAN is a movie I previously enjoyed but was never crazy about. It's been several years since I last saw it and upon viewing the new Scream Factory Blu-ray I have to say that this is so wonderfully 90s that I can't stand it. The soundtrack that could have been a Kerrang! magazine compilation, to the use of CD-Rom technology and the fact that Fangoria magazine was still relevant and celebrated in the horror community this movie embodies the early part of the 90s and provides a weird industrial goth monster villain that should probably be an icon of 90s horror but somehow isn't. It's a cool look into video game and virtual reality horror ideas and is mostly successful at what it does. Sadly there's a deleted scene that has some insane practical make-up effects work during the climactic "meshing" scene that is reminded me of the special effects work done in The Thing and Society. Sadly the scene was cut but I understand why as it really didn't make any sense with how the rest of the movie played out. I do wish they had done more prosthetics and make-up effects in the film though.
Posted by Celluloid Terror (Seth Poulin) at 11:19 PM