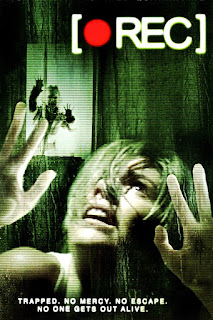 I started my journey through the REC series on day 12. It had been a bit since I watched any of them and I've never watched the whole series in a short period of time. With the new Scream Factory boxset in my hands the time was now. I think the first REC film is a damn near perfect horror movie and the best found footage movie ever made. It is well written and acted, suspenseful and tense, has an interesting setting, a likable lead and a story you can grasp on to immediately. It's also bloody as shit and scary as hell. It's one of the few movies I put on and immediately get a feeling in the pit of my stomach because I know what it lies ahead. 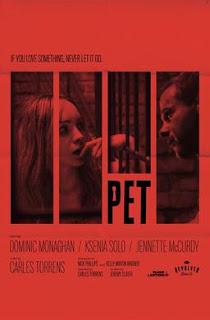 I switched things up with PET, a film I'd heard a good amount of praise for a couple years ago when it was released onto DVD. The film revolves around a quiet man working at an animal shelter who becomes obsessed with a girl he knew in high school after seeing her on the bus one day. He eventually kidnaps her and keeps her caged up in the shelter and learns she is a much darker person than he could ever imagine. And so is he. Meh. He goes from normal nice guy to kidnapping weirdo in about 2 seconds flat. It's incredibly hard to believe. It's okay I guess. 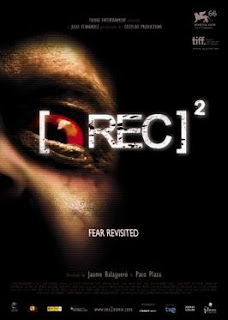 Back to REC with part 2 which follows the original just minutes after it ends. This entry takes a bit more of a high adrenaline action route to a very similar progression of events as the first but make no mistake, this is still a film built on suspense but has no problems getting up in your face with blood and violence. Again the characters are easy to like and you route for them. It expands on the story of the first one adding in a new element that keeps the first one in line but still spins it in a crazy direction. It is the smallest possible step down from the first but remains one of the best horror films of this century so far.
Posted by Celluloid Terror (Seth Poulin) at 10:33 PM