I started off day 3 with some Spaghetti Western action. There was a documentary done a few years back that IFC put out called THE SPAGHETTI WEST that I'd been wanting to see and I finally got my chance. For anyone newly interested in the genre this is a great watch and will shed some light on the 3 or 4 (depends who you talk to) cycles the genre had. I found it to be a little redundant with the information since it wasn't new to me but it did give me a chance to see a few video interviews with genre vets I'd never seen prior.

Naturally that put me in the mood for a SW movie. I decided to attack one I'd never seen before, so I opened my cheapie pack of 44 of them and decided to just go alphabetically. I'd only watched one out of the set (though I've seen more just not from that set). The first title on the list was 3 BULLETS FOR RINGO. Well, that just about killed my mood for westerns. It had a few good moments but overall it looked and felt more like an American 40's western than anything that came out of Europe in the 60s or 70s. I'm not a fan of those early American westerns on the whole (there are some exceptions) and I don't care for John Wayne at all. This felt all to similar to those.

Eventually I decided that I needed to watch a good western so that I wouldn't let the month slip away and only watch the one due to the bad taste it left. I got around to watching CEMETERY WITHOUT CROSSES. This was another first time viewing but one that I've been anxious to see and putting off for whatever reason. After popping in my DVD-R (Only available in a costly rare dvd from Germany) of it I realized about 15 minutes in (there isn't much dialogue in this film) that it wasn't bad dubbing but the audio was out of sync. To the computer I went. With straightened out audio what I got was a moody, well made SW that I needed. Some great acting here with subtlety and expressions rather than endless dialogue. I'm glad I finally watched it and I hope someone else will release a legit dvd of it so I can buy it. 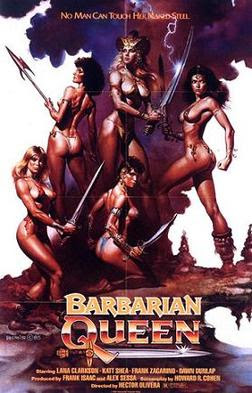 For a change of pace I went with the Corman produced BARBARIAN QUEEN. This is sword & sandal cheese at it's cheesiest! 70 odd minutes of sword fights, beautiful women running around with barely anything on (if anything at all) and that's about it. What else is there to ask for? This isn't high art but it was entertaining. 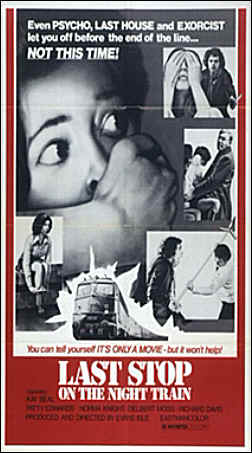 Day 4 ended with a Blu-Ray I'd been anxiously awaiting, and then anxiously awaiting a price drop on. NIGHT TRAIN MURDERS was finally mine and I decided to save it for the challenge. This is essentially Last Hose On The Left on a train but I feel it was made better (directed by gialli veteran Aldo Lado) and is much more mean spirited. There is no forced pants pissing here, what you get is much nastier. Great stuff.

4 Days in, 12 movies down. Some mixed results but it's fun. I have no goal or anything so it's just laid back. Expect another disc review by Thursday. And the first giveaway of the month this weekend. Thanks for reading!
Posted by Celluloid Terror (Seth Poulin) at 11:08 PM