Already 10 days into the month? Hard to believe. Day 9 had my first re-watches of the challenge. I'm trying to keep them to a minimum and so far I'm doing okay.

First was a re-watch of a movie some would call a guilty pleasure but I love this thing shamelessly and have since I was about 9 years old. Congo isn't good, but it's funny and has some okay action. Tim Curry and Ernie Hudson make the movie for me. It certainly isn't what director Frank Marshall wanted it to be but it never ceases to entertain me in all of it's cheesy glory.

Charles Bronson made his first appearance of the challenge in The Mechanic. I didn't know much about it before the remake other than the fact that it existed. I didn't really know much more after the remake came out, which I never saw... so I was pretty blank coming in. It was decent. Without Bronson I don't think it would have been as good as it was. It was a fairly thin movie, thinner than it needed to be. There was some good action and an awesome ending though. 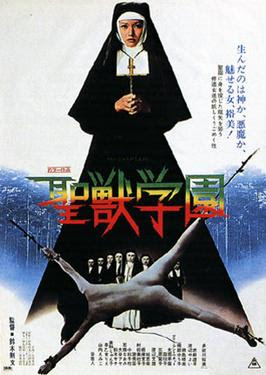 Next was my 2nd viewing of School Of The Holy Beast. The first time I saw this movie I liked it but I don't think I truly appreciated it. It is a nunsploitation movie from Japan... but it is so much more than that. With a top notch director in Norifumi Suzuki this movie rises way above any normal exploitation fare and is in a league with the best.

I had a case of yellow fever... Giallo fever that is. Death Laid An Egg is a title I've had sitting around a while and never watched it. If writing has ever failed a movie with cool direction and attractive women it was this one. The actors are all competent, and Guilio Questi lends some wild and interesting work from the director's chair. The problem with the movie is how the script goes from nothing happening to a random twist or major event all of a sudden. It not only feels rushed but like there are major parts that were removed.

One of my biggest surprises so far this challenge has been Trip With The Teacher. While this is certainly no masterpiece I was expecting much less than what I got in this piece of pure exploitation. High school girls and their teacher are kidnapped by a pair of crazy bikers and we we get all the good stuff that the 70s had to offer- chase scenes, murder, rape, Zalman King (who was a big part of the challenge the last couple of days without me even knowing it!). Not the best, but much better than expected and something I'll certainly revisit. 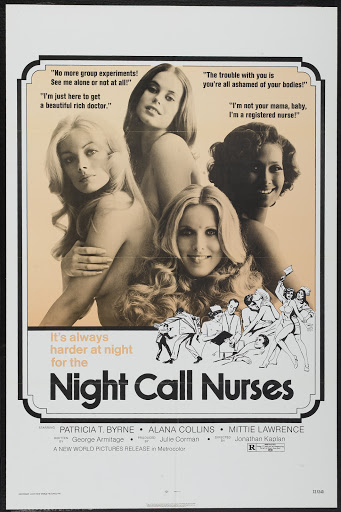 Finally these 2 days ended with Night Call Nurses. The 2nd title from the Roger Corman Nurses DVD collection. This one was a lot of fucking fun. 3 attractive nurses get in to wild situations with black revolutionaries, a drug addled trucker and a weird hippie 70s doctor who only really wants sex. Hot nurses + crazy situations + regularly dropping your clothes = a recipe for success.
Posted by Celluloid Terror (Seth Poulin) at 2:44 PM

I remember having Congo on VHS and bringing it into school on the last day of term for my class to watch, Idon't think they were so impressed but I loved it! The bad gorillas were really scary too lol

I'll be sure to check out School of the Holy Beast too, haven't seen too much nunsploitation, cool article :D

They Made Me Do It

I wish I got to watch cool movies like Congo in school haha!

As for Nunsploitation check out Ken Russel's The Devils and Flavia The Heretic.

Watched Death Laid An Egg when I was trying to decide what movies to show on Giallo Night. It was alright, but I decided against it. I did however finally track down a subtitled copy of Tutti Defunti Tranne I Morti that I'm anxious to check out.

Well Pupi Avati is solid so hopefully it turns out good.