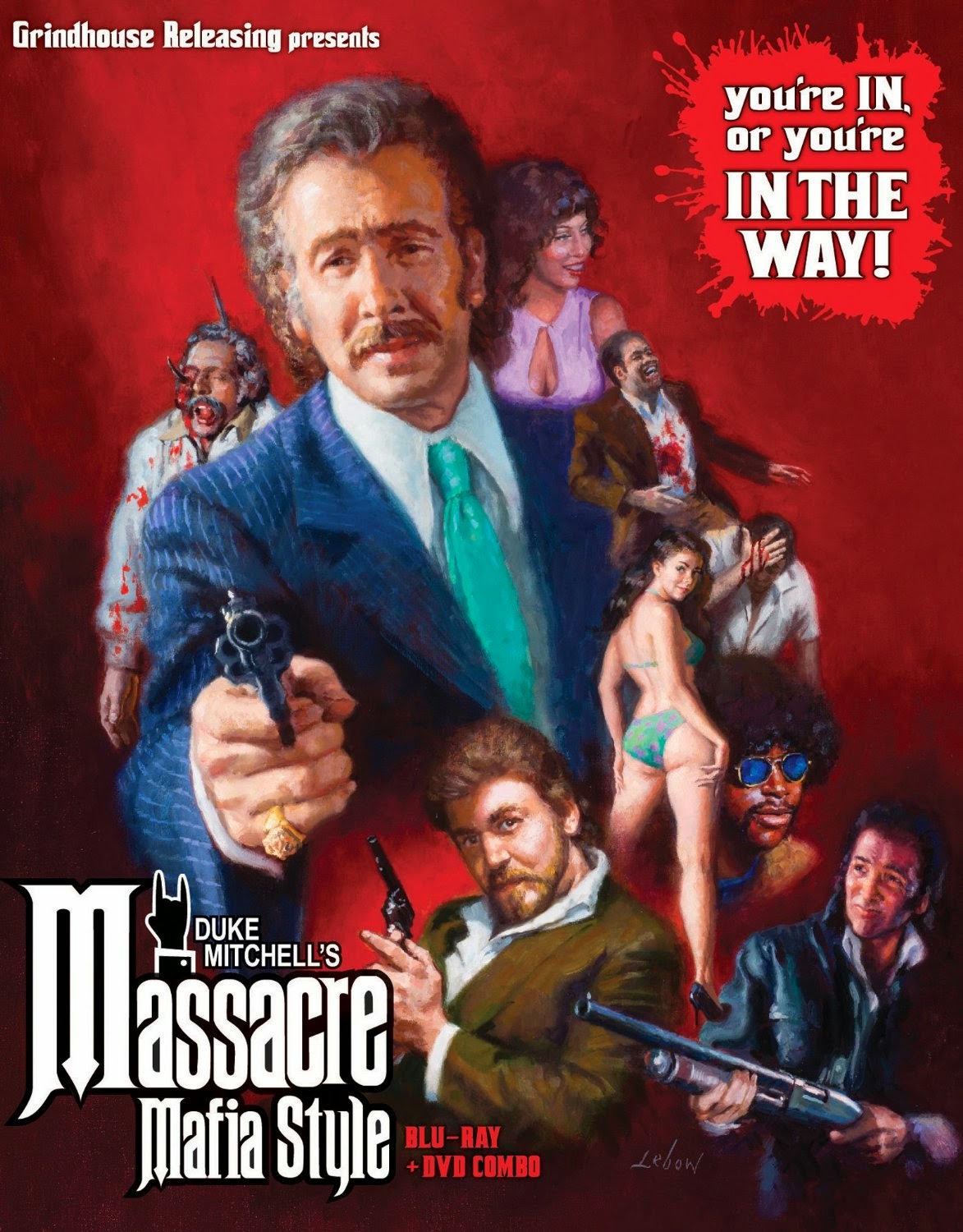 The Film
Duke Mitchells stars as Mimi Micelli, the son of a mafia kingpin who decides to return to America leaving his baby son to be raised by his father. Mimi head's to Hollywood and quickly finds his niche in the organized crime family there, leaving a bloody mess nearly everywhere he goes. Eventually Mimi decides he wants to take down a major pimp they call "Super Spook" which gives Mimi and the gang all they can handle until Mimi decides to leave the crime in Hollywood behind and return home to his father and see his son who is now grown.

MASSACRE MAFIA STYLE, also known as Like Father, Like Son, is the directorial debut from famed nightclub performer Duke Mitchell. Mitchell made this movie as an answer to The Godfather, promising more action and violence than the classic gangster film. Mitchell certainly delivered on that promise. If the opening and closing scenes of MASSACRE MAFIA STYLE don't leave a lasting impression on you I don't know what will. They are truly two of the most memorable scenes I've ever had the fortune to watch play out onscreen. 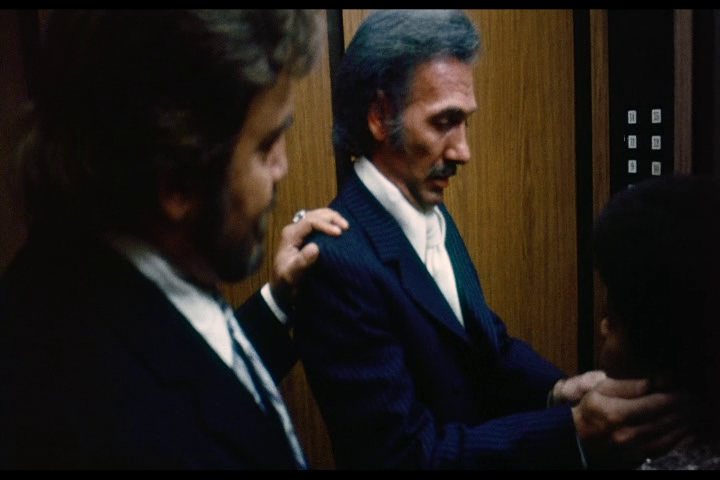 Just about every big plot device and main idea for mob movies are crammed into the 82 minute run time. Mitchell manages to get really solid performances and action sequences out of his limited budget. There's really no lull in MASSACRE MAFIA STYLE. It pushes and pushes until it all comes to a screeching halt at the end. The fact that much of this violence is set to extremely stereotypical Italian songs that you might hear at your local Olive Garden or at an old nightclub just makes it all that much better, if even a bit surreal.

If Duke Mitchell made MASSACRE MAFIA STYLE as an answer to The Godfather he certainly made a film I'd rather watch over The Godfather. While I can't say that this film is technically superior to the Francis Ford Coppola film, I can say that there's no doubt in my mind I would choose to watch this crazy violent, uber-exploitative take on the mafia movie nine times out ten. Hell, It'd probably be more like ninety nine times out of a hundred. It really is that good. Any and all fans of exploitation film need to see MASSACRE MAFIA STYLE.

The Audio & Video
Grindhouse Releasing gives the high-def treatment to MASSACRE MAFIA STYLE with a largely gorgeous anamorphic widescreen (16x9) transfer. Scanned from the original director's cut, the transfer features great detail, particularly in close-ups. Colors are vivid and natural while skin tones appear healthy without any waxiness. There's sporadic moments where the image shows a bit more wear from age, being a bit more washed out. These moments only make up a small percentage of the film and don't look bad enough to complain about. There's some scratches and speckling scattered throughout but the vast majority of the film looks fantastic. The DTS-HD Master Audio track is clean and crisp. I didn't notice any damage or background noise to the track. The mix is well done as the soundtrack and the dialogue are complimentary to one another. 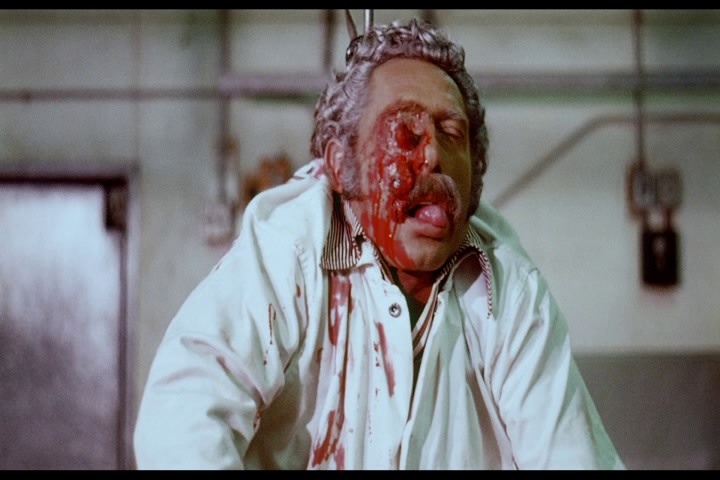 Please note: Screen grabs have been taken from the DVD copy of the film and don't represent the glorious quality present on the Blu-ray.

The Extras
This 2 disc, Blu-ray/DVD combo pack is loaded with special features, including...

And if that wasn't enough, a Blu-ray exclusive feature of BELA LUGOSI MEETS A BROOKLYN GORILLA. Yes, an HD presentation of the film in which Duke Mitchell makes his feature film debut. 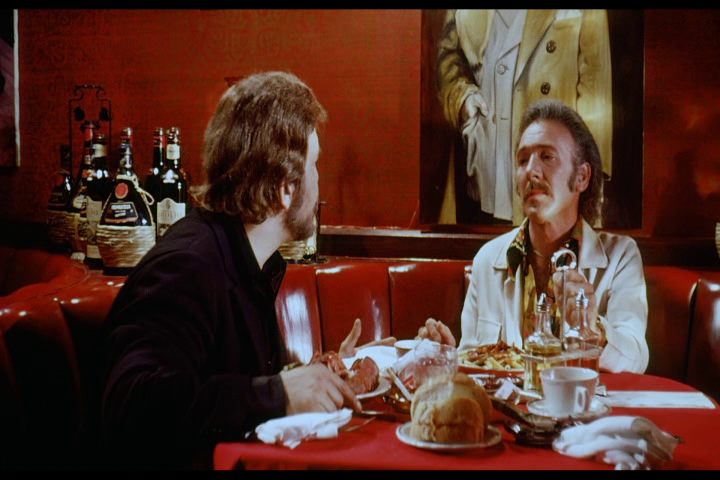 The Bottom Line
It's been a long time coming and it was well worth the wait! This beautiful release from Grindhouse Releasing is a potential candidate for the best home video releases of the year!

Awesome write up, I pre-ordered this baby when I heard it was coming. can't wait. Grindhouse Releasing is the company of all companies on there blu-ray releases. They give such treatment and beauty to the blu-ray products. I love them all. Personal favorites I own CANNIBAL HOLOCAUST, AMERICAN HIPPIE IN ISRAEL, THE SWIMMER, and I am sure this one will blow me away also, can't wait

They really are as good as it gets. My only wish is that they released more!

We spent some time talking about this movie and Duke Mitchell in the latest episode of our podcast. If you're interested you can check it out at http://filmageddon.com/episode-6-podcast-mafia-style-with-jacobqknight/