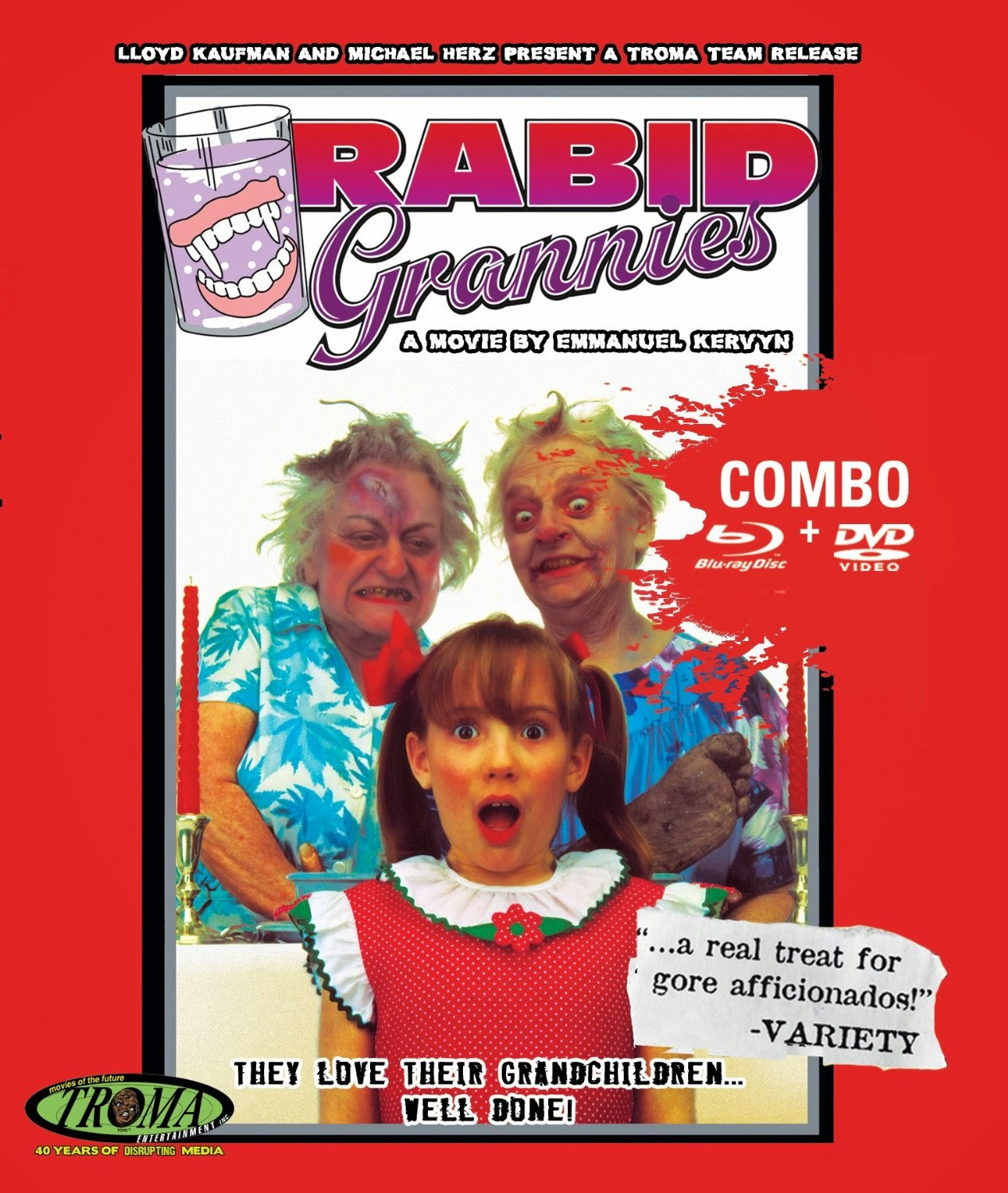 Forgive me in advance, this review will be a little different than most disc reviews due to the truly bizarre nature of this release.

Let me begin with the film itself as I know it to be. RABID GRANNIES centers around a dinner party held by two elderly aunts for their relatives. When the aunts open gift from the black sheep of the family which happens to be some sort of demonic box they're transformed into mutating monstrous demons and begin killing off the rest of the family in disgustingly gory and bloody fashion. In the vein of cheesy horror classics such as Lamberto Bava's Demons or the great Night Of The Demons starring Linnea Quigley, RABID GRANNIES definitely holds it own among similar and more well known titles of the decade. There's some fantastic creature and gore effects along with some incredibly silly and hilarious dialogue. It deserves a bigger following and reputation than it has as it is really never talked about when campy classics of the 80s are being discussed.

I first saw RABID GRANNIES years ago via Youtube. It wasn't the prettiest presentation but it was mostly complete, at least as far available releases in the states were concerned. I understand that there's no true uncut release of this movie available and that the most complete version is a German DVD release. Troma has previously released a DVD back in 1999. This release ran about 89 minutes and I believe to be the source of the video I watched when I was first exposed to the movie. There are other cuts floating around with heavier cuts to the blood and guts but the Troma DVD didn't seem too badly butchered. The movie had a nice flow and was still pretty gory.

Now Troma has released RABID GRANNIES on Blu-ray (the package also includes the 1999 DVD) and I was pretty excited when I heard the news. Then I read an early report that brought my excitement level down a bit but I thought maybe that report was being overly harsh. And then I received the disc in the mail to cover here so when I got the chance to pop it in and view an underrated gem that I was long overdue to watch again you'll only imagine the devastation and anger that came over me when I first laid eyes upon the utter shit I was looking at. The Blu-ray of RABID GRANNIES featured 2 cuts, one being labeled as a "producer's cut". I decided to watch the regular version first. This cut clocked in at about 69 minutes, a severely edited cut of the film compared to Troma's own DVD release of the movie that is a full 20 minutes longer. I've never heard of a version of the film this short. The only thing I can guess is that the Blu-ray was sourced from a PAL version of one of the edited versions of the movie that run in the 75 minute range and suffered from the 4% speed up due to converting from PAL to NTSC? This is a personal theory and one I admittedly have no evidence to back up but maybe? Either way, it really doesn't make sense to use that cut of the movie when you've previously released the movie in a far more complete version!

So we're dealing with a heavily cut version of the movie, at least it'll look great in HD, right? Right? Well, no. It doesn't look great. It doesn't even look good or okay. In fact it looks like this transfer was sourced from an old shitty VHS that has been duped a few times. The color palette for a big percentage of the film is just way off compared to the DVD. There are scenes that have a sepia tone look to them that look nothing like that on previous releases. There's scenes with a blue hue to them that shouldn't. There's no fucking sharpness to the picture at all and there's issues with artifacts and blocking in the image's background. The movie is cut to shit as well. Where the movie starts on Blu-ray is a good 10 minutes into the movie on DVD and explicit effects scenes are noticeably shortened. This is the daytime TV version of RABID GRANNIES if there was one and if the TV station spilled coffee all over the print and then ran it over with a truck a few times.

Maybe the Producer's Cut will be better... after all it is the PRODUCERS CUT! I'd love to know the history behind this cut and if anyone involved with the movie in any way, let alone a producer, actually had something to do with it because it's the exact same version of the movie but with 90 seconds of black screen before the movie starts. Yes, that's it. You get to sit through a minute and a half of fucking nothing before the same shitty version, with the same shitty quality starts. Maybe that's the producer giving you time to rethink your decision to watch this version and pop in the DVD instead!

There's a bit of irony in the whole thing as the only improvement the Blu-ray has over the DVD is that it finally gives us the movie in a widescreen format. The old Troma DVD looks decent enough for an early DVD but it is cropped to a full screen presentation. So now we at least get the movie in its proper aspect ratio! Well not so fast. The Blu-ray is framed to a Scope 2.35:1 aspect ratio that simply looks too wide at times. Framing just looks a little off and head's are chopped off at times. I think, and if the information provided at IMDB is correct, the aspect ratio should be 1.85:1. What a fuck job of a release this is.

Troma has been pretty fucking good with their Blu-ray game so far. They've taken a while to get stuff out but everything they've put out has been quality. I don't know what the fuck happened with RABID GRANNIES but whoever is responsible for this thing should never be allowed near a BD release again. This is quite possibly the worst Blu-ray transfer I've ever seen. There's some special features including deleted scenes, and trailers and things like that but it doesn't really matter when the movie itself looks like total fucking shit.

I'm going to recommend this release with great hesitation and only with the giant asterisk of buy it for the DVD and get some special features alongside it on the Blu-ray. If you already have the DVD stick with that.

I love Troma and I hope this is just a single misstep along the way to more great releases on Blu-ray.