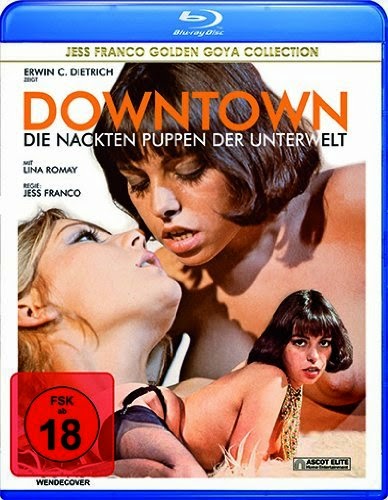 The Film
A private detective gets a much needed break with a job when he's hired by a woman to take comprising photos of her husband who is a nightclub owner. Shortly after getting the photos and finishing his job he is arrested as the prime suspect for murder in the nightclub owner's death.

Franco pulls his jack-of-all-trades routine here where he writes, directs and stars as the detective in the film. He had this routine in plenty of his films but few turned out as well as DOWNTOWN. His performance is among the best he ever gave and the story is handled well. Franco does give us a few of his notorious Franco directorial moments though with more than a couple long zooms into nude genitals and awkwardly long holds on the shot even while characters are talking. More than once the zoom goes so far as to lose focus on the shot. I guess that is just Jess being Jess!

DOWNTOWN is fun though despite any drawbacks it may have. Franco's love Lina Romay stars and is good and gives a few cabaret/nightclub performances that are sexy and memorable. She was quite the woman. The rest of the cast rises above the average mid-late 70s Franco flick to help the overall quality of the picture.

The Audio & Video
DOWNTOWN was shot a big softer at times than some of Franco's other films at the time and that is evident with Ascot Elite's transfer. While there are some scenes that overly grainy or soft, the transfer is as good as it gets. The PQ has a natural film look, and it does have a good sharpness to it for the most part. Colors are nice and flesh tones are natural. There's a nice level of detail in textures as well. The German audio track is a 5.1 DTS-HDMA track with optional English subtitles. The audio quality is clear and crisp with no background noise. Levels are even and steady with a strong mix. Subtitles are nicely translated and timed well.

The Bottom Line
DOWNTOWN is a pretty decent flick from Franco and if you're looking into some of the lesser known or talked about Franco films this isn't a bad place to start.