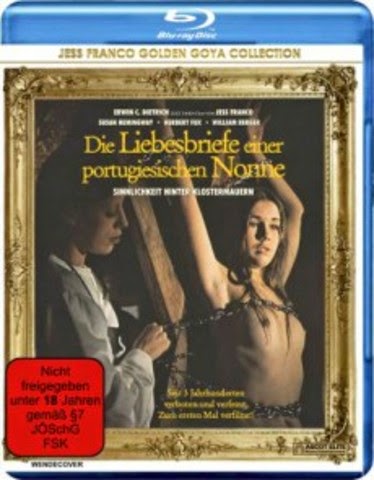 The Film
When a corrupt priest sees Maria flirting with a boy in the forest near her home he brings the girl to her mother and orders the mother send Maria to his convent to become a nun as penance. Of course there is a fee to be paid to the priest and the church for such a service. Maria is sent, but not before her mother belittles her in front of the priest for leaving her penniless. While at the convent Maria is stripped naked, left in solitude, tortured, seduced by other girls, tortured more when she falls victim to a fever and hallucinates and did I mention she was tortured? All in the name of the lord, of course. And when she sees the priest and Mother Superior worshipping the devil she is accused to being a witch and sentenced to burn at the stake.

LOVE LETTERS OF A PORTUGUESE NUN is a fine and really unsung example of the Nunsploitation genre. Franco fits in a bit of psychological and hallucinatory horror elements to go along with the inherent sleaze that comes along with this genre. Lesbianism and Satanism run rampant in LOVE LETTERS and it makes for a damn entertaining 90 minutes of Jess Franco greatness.

The Audio & Video
Ascot Elite gives LOVE LETTERS its Blu-ray debut with a transfer that is largely very nice. There are a few instances where colors fluctuate or the picture is a bit soft but the majority of the film is sharp and filled with vibrant colors and natural healthy looking skin tones. There's no edge enhancement or excessive DNR noticeable. The English 5.1 DTS-HD audio track sounds great and has no background noise. It is crisp and mixed perfectly so that dialogue and soundtrack compliment each other. German 5.1 DTS-HD and 2.0, Italian 5.1 DTS-HD and Spanish 2.0 tracks are also availabel with optional English or Japanese subtitles.