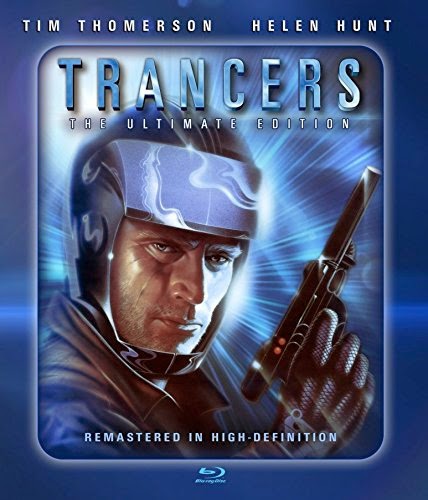 The Film
Agent Jack Deth (Tim Thomerson) live in Angel City in the year 2247. He is currently wiping out all of the Trancers in the city left over by a major criminal known as The Whistler. Trancers are people that have been psychically manipulated in to evil henchmen. Deth finds out that Whistler isn't dead, he is alive in the year 1985. Deth has to travel back in time to inhabit the body of one of his ancestors to track down Whistler and stop his evil tyranny once and for all.

TRANCERS is a great mix of sci-fi, action and film noir with Charles Band's B-movie flair. The acting is surprisingly great from the grizzly and tough Jack Deth to the young, care free sidekick performance from Helen Hunt who is immensely likable in her role. Also supporting roles from Art LeFleur as Jack Deth's superior and Biff Manard as a down on his luck ex-baseball player who adds some comedy to the film. TRANCERS may very well be the best Full Moon production of the mid to late 80s and certainly looks better than its B-movie origins would suggest.

The Audio & Video
Full Moon gives TRANCERS its high definition debut with pretty good success. The image quality is quite a bit sharper than its DVD counterpart giving way to increased detail levels especially in skin tones and textures. There is still a bit of softness to the film but it seems to have more to do with the original photography of the film than with the transfer of this Blu-ray. TRANCERS is also finally given the anamorphic widescreen treatment. The 5.1 surround sound audio track sounds very good with a lively and full sounding track. There's no background noise to speak of and the mix between dialogue and the great score/soundtrack is spot on.

The Extras
Special features include:
-Audio Commentary track with director Charles Band and star Tim Thomerson
-Daniel Griffith's TRANCERS featurette - A 15 minute "making-of".
-Rare interviews with Tim Thomerson, Helen Hunt and Megan Ward
-Still gallery
-TRANCERS:  CITY OF LOST ANGELS - The TRANCERS segment from "Pulsepounders" that was once thought lost. This is definitely the coolest feature on the disc. Think of it as "Trancers 1.5" or a bonus adventure of Jack Deth.

The Bottom Line
TRANCERS is one of Full Moon's longest running series and with six full length chapters, plus the short from the Pulsepounders production there's no reason not to check out this much improved Blu-ray to get started on the series. I sincerely hope they release the rest of the series on Blu-ray sooner or later.