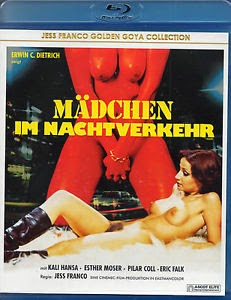 The Film
This is the Jess Franco I try to stay away from. GIRLS IN THE NIGHT TRAFFIC is the story of three high class hookers who sleep together and through a series of flashbacks recount their evening with their clients the night before including putting on a sex show and role playing as a corpse. One of them is kidnapped by a pimp posing as a photographer and she ends up in a weird prison. Her friends end up in the same prison to help her get revenge.

Blah. I'll put it plainly so you can skip to the next section if you wish... this film fucking sucks. It's nothing more than a reason to show naked women on screen and while that is fun and everything it becomes like work when that is all a movie has going for it. There is another cut of the film but that is merely the X-rated hardcore cut which adds on 20 minutes of hardcore sex cut from other movies. I don't know how responsible Franco is for this as he is uncredited as a director but it has all the markings of his other shitty films so he'll shoulder half the blame and Dietrich will to. Thanks for nothing.

The Audio & Videos
We can't blame Ascot Elite for the lame film but we can tell them "job well done" on a very nice Blu-ray presentation. The anamorphic widescreen transfer is very pretty with good sharpness and clarity and vivid and natural colors. The 2.0 German audio track is mixed fine and sounds good. The English subtitles are a little goofy but they seem to be timed well enough and translated fine.

The Bottom
I have a hard time recommending this title for anybody at all but I suppose there are Jess Franco completeists that will want this and they'll be thankful that a dreadful film got such a competent Blu-ray release.

GIRLS IN THE NIGHT TRAFFIC is available HERE
Posted by Celluloid Terror (Seth Poulin) at 5:49 PM