Under The Skin (Blu-ray Release) - Lionsgate 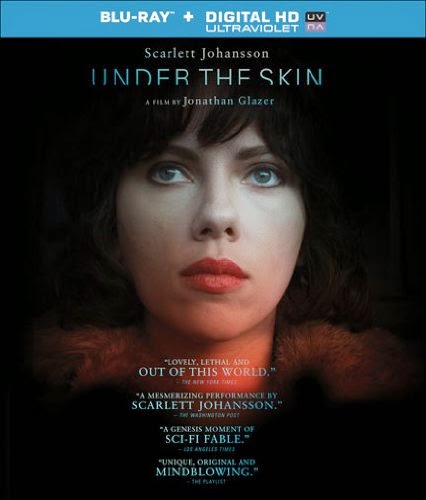 The Film
In an empty room, an alien being assumes the female human identity taking on the host's physical traits. This alien being combs the streets of Scotland looking for lonely men to prey on. When a man gives into her advances he is thrown into a nightmarish existence or darkness where he is stripped and drowned. The beautiful woman continues her ways until coming upon a man with a badly deformed face who is a genuine and sweet person. He is the only person to leave that nightmare plane alive only to suffer a disgustingly mean spirited fate. It is at this point where the being begins to feel emotions and see herself as human, unsuccessfully trying to adapt to human food. She flees into the woods searching for clarity where she is attacked and nearly raped, exposing her alien body to her attacker who pursues her further into the woods with violent intentions.

UNDER THE SKIN has some great ideas going for it along with some stylish direction from director Jonathan Glazer and gorgeous cinematography. It is visually stunning at times with its bleakness and stark contrasts. Unfortunately the ideas the film introduces end up being mostly hollow aside from the most basic idea to look deeper than the surface in yourself and others.

I wanted UNDER THE SKIN to be something special. I think Scarlett Johansson gives a solid performance but it all for naught since UNDER THE SKIN fails to be anything other than an underdeveloped idea.

The Audio & Video
Lionsgate gives UNDER THE SKIN a gorgeous Blu-ray release. The transfer is pristine with bright whites that never burn too hot and ultra deep black levels with no blocking or compression issues. The little bits of flashy color pop and skin tones are nice and healthy. It's a very nice 16x9 picture. The English 5.1 DTS-HDMA audio track sounds excellent. The full bodied track is very crisp and clear with a nice mix between dialogue and score.

The Extras
A "Making Of" featurette is the lone featuer

The Bottom Line
If you're a Scarlett Johansson fan UNDER THE SKIN is worth a rental. Unfortunately it fails to be anything more than that.

UNDER THE SKIN is available HERE