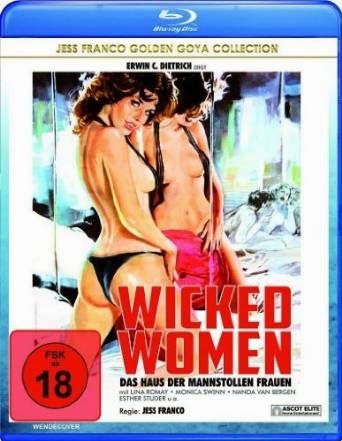 The Film
A young woman (Lina Romay) is found naked and bloody in a mansion and is brought to a mental hospital when she won't speak a word. Her caretakers don't have the woman's recovery at the front of their mind, it certainly isn't what they're interested in. They like to get a little closer to the women in the hospital. All the while a cloaked killer is on the loose dispatching of patients at night.

WICKED WOMEN is one maniac killer away from being pretty standard Women In Prison fare with the prison switched for a mental hospital. That wouldn't be a bad thing necessarily but the addition of the murderer makes things a bit more interesting, if not a little off kilter.

WICKED WOMEN isn't a great film, it features some poor direction from Franco, including a totally out of focus shot in the opening scene of the ambulance pulling up to the house. It's always interesting seeing a Jess Franco for the first time and wondering which version of the director you'll get. The one that can direct a beautiful scene or the one that is all over the place with awkward shots and useless zooms and pans. WICKED WOMEN is an entertaining trashy film despite being a poor directorial effort from Franco.

The Audio & Video
Ascot Elite does another great job with the 1.78:1 anamorphic widescreen transfer of this film. There is a nice sharpness and clarity to the picture. Colors and flesh tones are vivid and healthy. The German DTS-HD 5.1 audio track is crisp and mixed well. The optional English subtitles are nicely translated and read well.

The Bottom Line
Franco and trashy film fans will enjoy WICKED WOMEN but it isn't one of his finest efforts. That's just the nature of Jess Franco.