Just a pair of films today, which happen to be sequels from the same franchise. 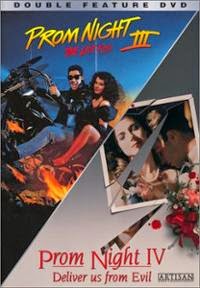 PROM NIGHT 3 made the purchase of this $6 DVD well worth it. It is a direct sequel to Prom Night 2 and in this one the ghost of Mary Lou returns to seduce Alex, a totally average student. Mary Lou uses her deadly magic to raise Alex's grades and kill off his detractors including rival football players, teachers and guidance counselors. It's all campy as hell and full of humor - just pay attention to the intercom system. Not perfect, and a bit too heavy on being silly at times, PROM NIGHT 3 is still a very entertaining flick.

PROM NIGHT 4, not so much. The final entry into the series has nothing to do with any previous chapter, instead opting to focus on a small group of teens on their prom night who are terrorized by a maniac who had been kept subdued in a church for 33 years. This force of evil managed to escape and head's to a place he was familiar with in his past, which is now a house where the teens are partying, drinking and fucking. There's nothing special about this one. It's a mediocre (or less) stalk and slash film with an inconsequential religious subplot. It isn't the worst film I've watched so far but that doesn't make it good.