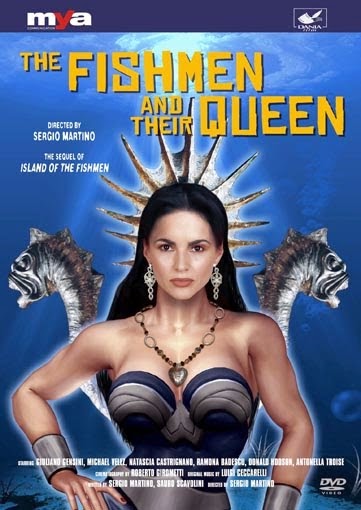 I am a big fan of Island Of The Fishmen. I think Sergio Martino made an overly cheesy creature feature that is very entertaining and has some fun creature design. It's not a great movie but I have a lot of fun watching it. About 20 years later he made the sequel, THE FISHMEN AND THEIR QUEEN. When I turned it on I thought the disc had the wrong film on it as the first thing I saw was footage from 2019: After The Fall Of New York, Martino's post-apocalyptic action/sci-fi film that is pure fucking gold. Quickly I realized that this old footage had been spliced together with some newer footage involving 2 teen boys trying to escape the city which they do with the aid of some more spliced in material from 2019. After meeting an old man they sail to a mostly deserted island that is inhabited by some monster like people who work for their queen, a few natives and the fishmen. Splice in some footage from Island of the Fishmen along with the new adventure film footage that is pretty fucking cheap and corny and you've got THE FISHMEN AND THEIR QUEEN. I can't help but have a small amount of admiration for the film for how ridiculous it is. I can imagine Martino sitting there in his 1995 home thinking "I need to make a movie... let's shoot half a movie and just use footage from 2019 and Fishmen... GOLD!" Maybe that's how it came to be, maybe not. It's a weak film (obviously) and you'll mostly be shaking your head or be plain bored despite the few moments of almost thinking you're enjoying this for all the wrong reasons. You aren't. 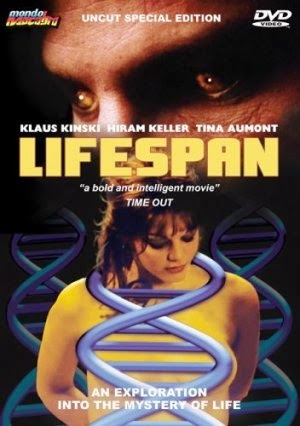 LIFESPAN is a movie that could have been great. There was an intelligent script ready to lead the viewer along a slow burning journey into a quest for eternal life that causes a scientist to become a murderer. Instead the movie starts and ends without a real shift in tone. It ends on a flat note and never goes anywhere. It is a major disappointment. What we get isn't bad it is what we don't get, where the movie never ends up at, that is the problem.