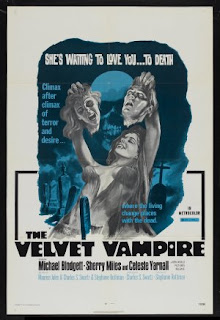 What fabric do you prefer your vampires be made out of? Cashmere? Wool? A nice cotton-poly blend? Well The Velvet Vampire is none of those... no, this early 70s horror film features a centuries old vamp beauty who invites a young couple to her desert home for a getaway. She tries to seduce the man lustfully time and time again, nearly getting her way with him as she has no time for his girlfriend, until it's time for her to die. This one is okay... it has a dream like atmosphere and a rather trippy ending in how ridiculous it is. A sun hat can protect a vampire from the burning desert sun but a little trinket cross will hurt it? Sure, why not? An interesting flick either way. 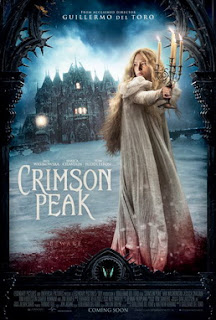 If there's one thing you can't argue it's that Guillermo Del Toro creates visually stunning films. He isn't a perfect filmmaker and doesn't always have the budget to create a perfect version of what he wants but he always makes it beautiful. Crimson Peak is another stunning film and it has three really damn good performances from our leads. The film is quite different from than the ad campaign would lead you to believe and I think it is for the best. A haunted house CGI fest didn't exactly look like it was going to be amazing but the tragic gothic romance wrapped inside of a horror film that was delivered was solid. I don't love it but I did like it. 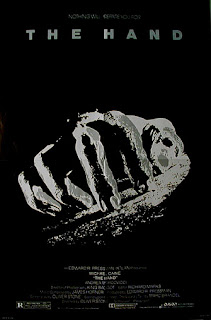 Sometimes a movie only succeeds because of a great performance from its lead. Michael Caine really carries The Hand. He plays a comic book writer/artist who loses his hand in an accident and begins to lose his grasp on his life and relationships while the severed hand goes on a murderous rampage. Oliver Stone directs this movie that doesn't come off as campy at all and somehow pulls it all together for a decent little dramatic horror film.