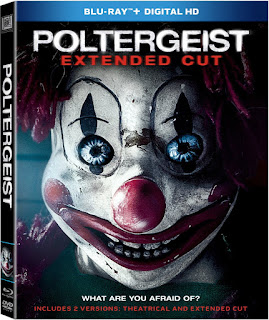 The Film
A family moves into a home in a suburban neighborhood and they quickly begin experiencing strange events leading to a full on attack from angry spirits on a night when the three children are left home alone and they abduct the youngest daughter. The family must find a way to enter the spirits plane of existence and rescue their daughter before the spirits use her as a guide to find their eternal rest and the family loses her forever.

This is a remake of the classic Steven Spielberg production that was directed by Tobe Hooper and follows the storyline and events of that 1982 film pretty much straight on. In fact this version of POLTERGEIST feels like a checklist of notable scenes from the original, making sure to get some version of them into the final picture no matter how insignificant they end up being. Things being stacked behind someone's back in an impossible fashion? Check. Spirits in the TV with the line "They're here."? Check. Creepy clown doll? Check. So on.

A cast headlined by Sam Rockwell should be solid and able to carry the picture but instead Rockwell is very uneven in his performance, which hurts the entire rest of the cast in turn. This family is going through some incredibly terrifying and tragic events, and even without their daughter being sucked into the netherworld in the closet, their normal day to day life hadn't been going well but you wouldn't know that from the performances and reactions to the cast. The amount of concern shown is that of passing the remnants of a car accident on the side of the highway... a passing thought hoping everything is okay but not putting too much emotion in to it. "Wow, look at that... I hope everything is okay. I'm sure they're fine. Oh I love this song!"

The movie gets at least one thing right however, it gives us a glimpse into the other side where the spirits are holding young Madison, something the original film didn't do. And question CGI aside it did have an eerie look to it. On top of that the movie as a whole isn't awful, the negatives outweigh the positives but really the entire thing just feels like a Cliff Notes version that was copied down minutes before class. It's all there and it is watchable but the heart and soul of the original is missing.

The Audio & Video
20th Century Fox delivers a gorgeous looking and sounding Blu-ray. The 2.40:1 anamorphic widescreen transfer is stunning. Colors are rich and vivid while black levels are deep and inky with no blocking issues. Skin tones are natural and fleshy with no waxiness and surface detail is very high. The DTS-HD lossless audio sounds great and really booms when needed. There's no issues in the mix job or with any damage or distortions. It's no surprise that a major motion picture from 2015 has a brilliant A/V presentation but it is worth praising nevertheless.

The Bottom Line
When it is all said and done POLTERGEIST is a harmless remake that will have its detractors and its fans I'm sure. It isn't worth getting too excited about either way and if you're looking for a recent horror film for your Halloween marathon viewings POLTERGEIST is an easy watch at the very least.