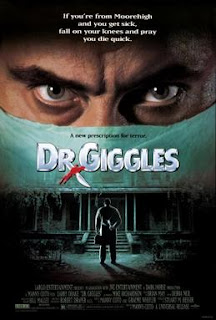 Dr. Giggles is one of those movies that I've seen bits and pieces of over the years but have never made it a point to sit down and watch in its entirety despite liking what I saw. This 1992 is a slasher holdout from the 80s, easily one that could have been made a few years earlier if it had less jackets around the waist and more big hair. The humor presented within is typical of the silly turn slashers started to take towards the end of their glorious (or not so glorious run) the decade before but it is played perfectly straight faced. Violent, a bit funny and not without a giant what the fuck moment in the "birthing" scene. I now fully understand the love this one has attained over the years and am on board. 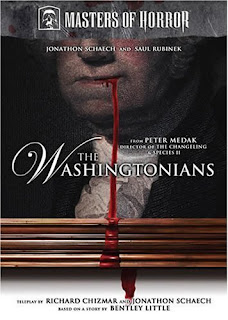 Next up was a Masters of Horror chapter I'd never seen and frankly didn't hold out too much hope for- Peter Medak's The Washingtonians, a story that turns our founding fathers into cannibals and now a loyal historical group maintains their practices. There's a bit of fun to be had here with trays of cheap looking human body parts on display as folks in powder wigs and further American Revolution era garb go to town on the feast like wild animals but the writing is weak and abrupt at every turn. There's not a hint of subtlety here, which I get is the point but it just comes off as trying to squeeze as much crap in as we can. And then we get the ending which feels extremely dated at this point and made me roll my eyes. 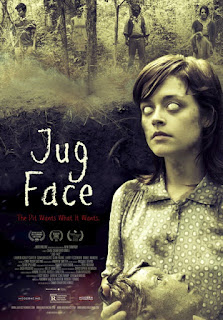 Finally I wrapped it up with our first Netflix viewing of the month, one I've heard very mixed things about over the last year or two but never lost interest in seeing - Jug Face. I'm glad I finally gave this one a chance because this is a sad and tragic film filled with some seriously fucked up ideas and lifestyles. An obvious commentary but not one heavy handed enough to turn away viewers simply looking for a well made film, Jug Face is the independent horror that we should be praising. Wonderful writing and top notch performances are key here and they couldn't be better. This may come as one of the biggest pleasant surprises of the month.