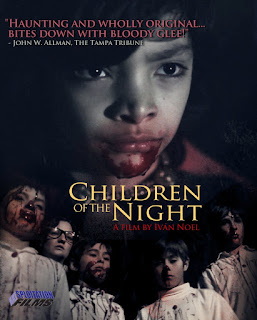 The Film
A reporter from Buenos Aires named Alicia is invited to visit a children's refuge in a small town where the children all battle and suffer from a disease that has no known cure. Alicia accepts the invite and shortly upon arriving discovers the refuge, named Limbo, is actually a sanctuary for vampires. The vampires at this sanctuary are of various ages but are all stuck in a childhood body as their bodies stopped aging at the time they were bitten. They carry out their lives slowly spreading their race across the land while practicing a Catholic faith including Baptisms, and trying to avoid encounters with local hunters who are hellbent on erasing their race from the planet.

CHILDREN OF THE NIGHT is a very regional film in the sense that it was filmed on location in a small Argentinean town and the entire cast of children was picked from that area with no real acting background at all. Sabrina Ramos who plays Alicia was quite good at being torn between the life she knows and her forgotten past that calls her, and Ana Maria Guinta, who sadly passed away in March of this year, was very believable and endearing as the head mother figure of the sanctuary.

The children must also be commended, especially Toto Munoz who played Siegfried and Lauro Veron who played The Count. These two boys were the lead roles for the children and kept things natural and believable. Yes, they're a bit rough around the edges, the whole movie is, but they gave it their all and the movie is better off for it.

The film isn't without its flaws, there's some moments where the sound echoes quite a bit because of the interiors in which they're shooting. Sometimes you can rectify that problem and other times there's no time or money. It's a minor problem here especially compared to the soap opera visual style the film has for the majority of the film. There are a few different camera types and visual styles used in the film but the biggest one is our standard camera that gives the film that overly smooth look common to soaps. This was easily my biggest problem with CHILDREN OF THE NIGHT, and it really wasn't that big of a deal once I adjusted to it and settled in.

The story here is interesting and takes on more angles and ideas than you'd want to sit here and read about. It is far from being a single note vampire film. Some of the ideas come to fruition nicely, like our main story. That is the most important, but sadly some of the ideas introduced in the film are left as loose ends. When it's all said and done it makes little difference to the overall success of the film but it would have been nice to see these rather original ideas that have been introduced to this take on vampire mythology play out a bit more and give us a bit of satisfaction out of them.

CHILDREN OF THE NIGHT is a raw film, that uses its regional resources, including local fire departments and electrical companies to help achieve the final goal, it is obviously shot on a budget and on location doing the best with what they have. There isn't a doubt in my mind however that this movie wasn't made by a group of people, old and young, passionate about pulling it off and making it the best they can while having fun doing it. They succeeded. I think this movie is fantastic.

The Audio & Video
Artsploitation Films gives CHILDREN OF THE NIGHT a home on Blu-ray with a nice full HD 1080p transfer that keeps the film's natural look and OAR in tact. There are several different camera styles and looks on display in the film and the Blu-ray keeps them looking sharp with good detail and color representation and deep black levels for the most part. When lesser cameras are used in the film it is obvious that the Blu-ray transfer will suffer a bit, especially during darker scenes but it is an attractive picture for the most part. The 2.0 Spanish audio track handles the soundtrack and dialogue just fine with a well done mix job and no damage or background noise to speak of. Optional English subtitles are included and are translated and timed perfectly.

The Bottom Line
I've sort of fallen in love with this movie despite its flaws. Something about it simply calls to me and I want to watch it again right now.

CHILDREN OF THE NIGHT is available HERE
Posted by Celluloid Terror (Seth Poulin) at 6:49 PM