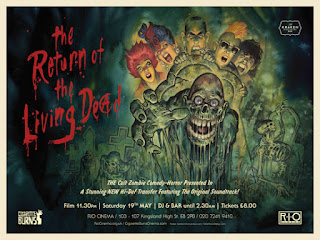 Things started out with a very late night/early morning viewing of Return Of The Living Dead. It is one of my favorite films and I've seen it countless times. I watch it every October so there's really no need to waste anymore time on it. It's perfect. 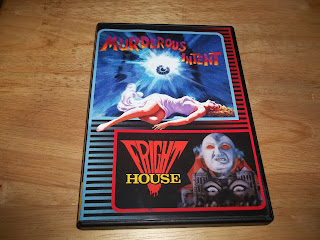 Next up were a pair of little films from director Len Anthony... I have no idea who he is aside from these two movies that Vinegar Syndrome released on limited edition DVD. So first up was Fright House... a schlocky, stupid and cheap tale of devil worshipping and Satanic sacrifice. Something about it was slightly entertaining and I'm not exactly sure what. Grampa Munster is even in it, which says quite a bit about the direction his career went sadly but he doesn't add too much life to the film. I'm not really sure anyone could. Still, it wasn't the worst piece of shit in the world. Maybe I'm just a sucker for cheap devil worship films where you throw down a cloth with a pentagram on it, light some candles and get some people to put on cloaks and chant some bullshit. That must be it.

The other Len Anthony film was Murderous Intent which left me with murderous intent for anyone involved with that piece of shit. The story is some convoluted bullshit about a writer who meets this dreadlocked man while waiting to pick up his child and this man begins to show the writer that his deepest fantasies may not just be fantasies... or some bullshit like that. It was impossible to pay complete attention to because it was awful. Just picture a movie where a nerdy white guy dreams of putting on a cheap samurai Halloween costume and hacking up his wife because the mysterious black man told him to. And relive that same scene over and over for 90 minutes and add in some awkward voodoo-ish dance imagery that feels slightly racist and you have Murderous Intent. 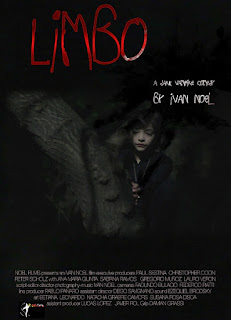 The day ended with a very cool little film out of Argentina called Children Of The Night. I have posted a full review of the Blu-ray from Artsploitation Films so I'll leave you with this - This is a vampire movie worth checking out if you're a fan of independent horror or vampire mythology in general. You can see that review HERE