Day 21 was a fun one with three first time viewings that I really enjoyed and revisiting one movie that had been on my mind lately. 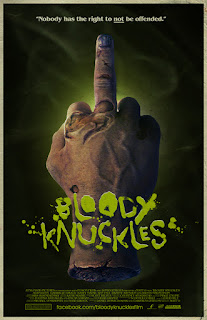 First up was Bloody Knuckles, a Canadian production from last year that is absolutely hilarious as an underground comic book writer offends a local gang leader and gets his hand lopped off. Of course his hand comes back to life in order to exact revenge and help get his owner's life back together. Filled with lots of raunchy humor and plenty of violence, Bloody Knuckles reminds me of a "classier" Troma production. Or a film similar in tone to Troma productions without having the Troma schtick. Offensive, violent and a bit heartwarming at times, this is one of my favorite new movies from the last couple of years. 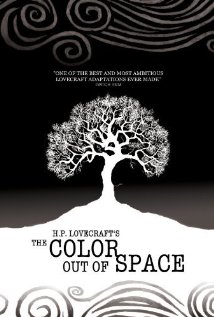 Then came another HP Lovecraft adaptation, one that I've wanted to see for several years. The Color Out Of Space was adapted in 2010 by director Huan Vu in Germany and it's a pretty good one. Despite some very poor CGI effects the film has that vibe and atmosphere that can only be summed up as "Lovecraftian". The performances also give off that eery and not quite right feeling as well. Solid writing, directing and acting really make this one a decent success that diehard Lovecraft fans will appreciate. 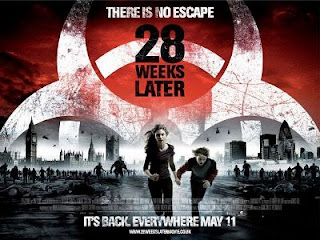 I'd been curious about 28 Weeks Later for several weeks. I haven't seen it since it was first released to DVD, and even then I may not have actually watched the disc in which case I haven't seen it since it was in theaters. It played out very similarly to how I remember it but everything seemed to move faster. There was no time t really let the suspense and tension build which was part of the reason this movie feels more like an action film than a horror sequel. The direction, shaky cam and effects also make sure that this movie is more of an action film in tone than a horror film. The movie isn't bad but it is predictable and very much style over substance. 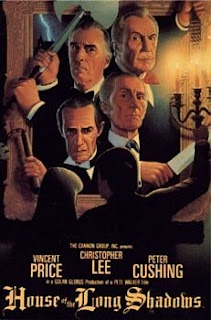 Lastly was my favorite film of the day which is no surprise given the cast and director... Imagine being Pete Walker and waking on set for the first day and realizing that you actually get to direct Peter Cushing, Vincent Price, Christopher Lee and not least of all John Carradine all in one picture. That's my film making wet dream if there ever was one. The House Of The Long Shadows is horror comedy romp featuring an entire generation's worth of legends. The comedy isn't only written in the dialogue but in body language and facial expressions. The quartet prove they're more than capable of generating laughs from the audience. The natural energy that Pete Walker brought to the film is similar to that of the movie Clue that would hit theaters 2 short years later. It's that frenetic energy of Clue but slowed down a bit and a bit less zany, but only a bit. You can tell they had a blast making this picture and it translates to the screen. It's brilliant to watch them seamlessly switch between their serious acting chops and then add that ever so slight comedic touch.