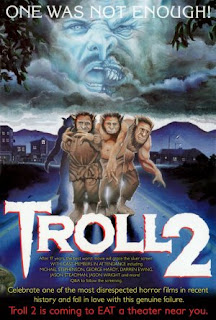 I started the day with an old favorite - Troll . The ultimate in so-bad-it's-good and a perfect movie to get drunk with and watch for the 100th time. 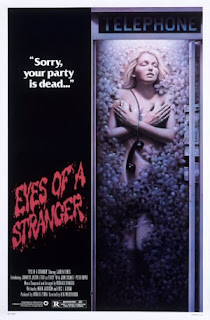 The next two films went back to first time viewings and first was the 1981 horror thriller Eyes Of A Stranger from director Ken Wiederhorn. Originally intended to be a bit more of a straight forward slasher the film makers realized the huge popularity of slashers and added more violence and bloodshed with effects from Tom Savini. The movie features a young Jennifer Jason Leigh in her first major film role as a deaf and vulnerable girl living with her older sister who is obsessed with proving that her neighbor is responsible for a series of chilling phone calls and rapes and murders. A bit slow going and predictable the film does have several tense and creepy moments and is on the seedier side of things. 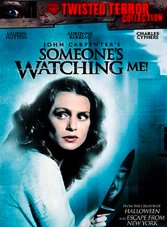 Oddly enough the next movie also dealt with obscene phone calls and a murderous stalker in John Carpenter's Someone's Watching Me. Made just prior to Halloween, this is a made for TV movie that sadly feels like a made for TV movie. It is too slow and could have used a slight trimming but the need to fill out a block on TV forced some padding in the runtime. You can see a raw and less confident version of some of the style that Carpenter used in Halloween on display here. It felt almost like a warm up or test run at some things that he succeeded with in his breakout film. This one isn't bad as it is competently directed and acted but it's simply too boring at times to be anything essential.