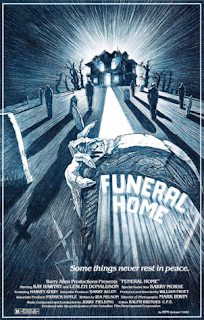 I love that artwork for Funeral Home. It's atmospheric and creepy in its simplicity. You know exactly what you're getting yourself into. I enjoyed the movie but felt had it given us a little bit more of the goods it would be a bit more highly regarded and talked about. The film based around a funeral home turned B&B where guests go missing and wind up dead is a fairly common plot and this one doesn't do much to make it original  but it uses tried and true plot devices to pull together a nice little chiller of a movie. 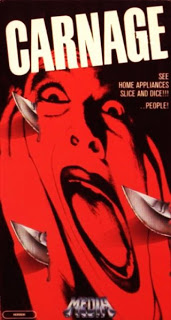 If my viewing of Carnage could be summed up by what my meeting with the film's director Andy Milligan would be like it would go a little something like this - "Hi Seth I'm Andy Milligan" "Hello Andy Milligan, I'm Seth, and that's about enough of you". My introduction (I'm pretty sure I've never seen an Andy Milligan film before) to the director who has released a handful of titles that have a decent cult following wasn't a good one. This film about a house that is haunted by a husband and wife who committed suicide in it several years prior is pretty fucking awful. The acting (if you can call it that) is dreadful, especially out of the ghost couple. Continuity and quality control on some things are piss poor (just take a look at the flying meat cleaver seen) and the effects work is cheesy as shit. There's something to the effects that was endearing in how obviously fake they were but somehow you still think "that was kind of cool". The movie is a bore as the vengeful spirits are more worried about keeping their house the way it was before they killed themselves than doing anything remotely interesting from a horror film standpoint. What a drag.