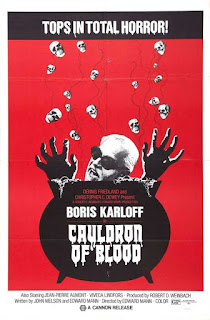 Things started off with one of Boris Karloff's later performances in Cauldron Of Blood. This one is a take on the murderous sculptor story that has been a part of horror for decades. Add in a slight giallo feel, some trippy psychadelic scenes and a strong script with good performances and pacing and this one is a really rock solid horror film from the late 60s. 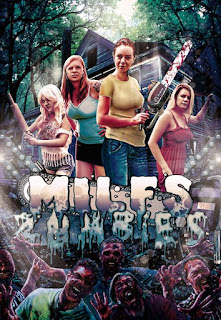 Next up was MILFS vs Zombies a movie I was a bit more interested in checking out after enjoying Ghoulish Tales from the same director the day before. Well all the cheesyness that worked in GT ended up annoying the piss out of me in MvZ. The film wastes no time giving us the gory goods but it still felt like the film took forever to actually get started. The script was obnoxious and didn't work for me at all. The positives are that the gore and nudity that were on full display in Ghoulish Tales were once again on display here so at least it has the eye candy factor going for it. And the scene where a woman is disemboweled through her vagina. There's that too. 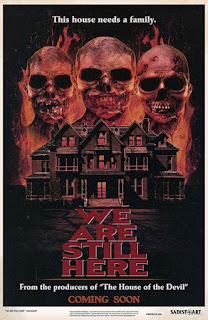 We Are Still Here will undoubtedly go down as one of my favorite movies of the challenge and of the year in general. I fucking loved this movie and it is down right scary. There are some scenes in this one, particularly early on that had me shook. The atmosphere is thick, score is moody and the design of the ghosts is very cool. The third act also features quite a bit of blood and guts being thrown around which was a bit of a departure from the tone of the rest of the film but it didn't feel out of place. I don't like handing out perfect scores to films I've only seen once and I'm not sure this one would have been a perfect 10 either way but it is certainly up there. 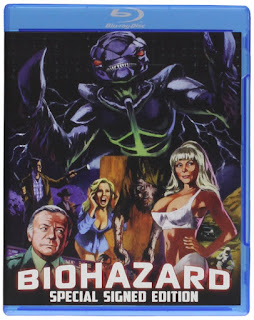 The night came to a close with some Fred Olen Ray cheese in the form of Biohazard. This one is filled with ridiculous shit like huge supermonsters hiding in dumpsters and weird worm monsters and a genuine disdain for E.T. If you want something light hearted and purely of the 80s, but filled with blood and boobs, Biohazard is a film for you. The new Blu-ray edition is quite nice as well.

I an very curious about the Karloff movie and We Are Still Here.

Both are very much worth your time!