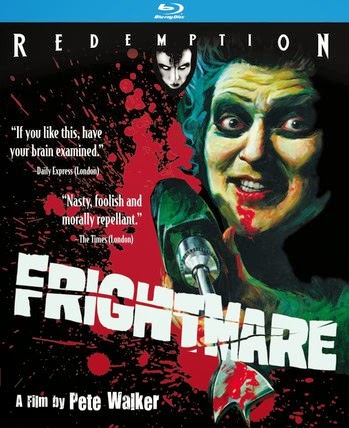 The Film
Dorothy Yates and her husband Edmund are freed from a mental institution after years of treatment after she committed acts murder and cannibalism. Now Dorothy has guests visit their isolated farm home for tarot card readings. Their eldest daughter Jackie also visits hoping to keep her mother sane with the help of her father. Jackie has to deal with her younger sister Debbie who hangs around a biker gang and is generally a nasty brat of an adolescent. Jackie keeps their parents a secret from Debbie, fearing the relationship will be toxic. Unfortunately for Debbie, and her father who is in the middle of a disastrous mess, Jackie is well aware of her mother and they both despise Debbie for keeping them apart.

FRIGHTMARE is a brilliant psychological slow burn from the underrated genre director Pete Walker. Sheila Keith is wonderful as the disturbed mother as is her on-screen husband Rupert Davies who is lost in the mix of a family torn apart by broken minds. Walker's direction is tight, and the story is far from just pure psychological horror as it features some rather nasty murder scenes. If you've never seen FRIGHTMARE you're doing yourself a disservice as it is one of the best horror films to come out of the UK in the 1970s and it gets better with with each viewing.

The Audio & Video
What can I really say about this Blu-ray besides "YES!"? Kino Redemption has delivered a stunning looking and sounding disc. I dare say it is a near perfect presentation. The 1.66:1 anamorphic widescreen transfer is gorgeous, with strong detail, lifelike skin tones, vivid but natural colors and no edge enhancement or DNR. The soundtrack is pristine with no background noise, crackling or popping. The mix is spot on and I doubt this will ever sound better on home video. It is weird to smile during a film such as FRIGHTMARE but when you first experience this disc you will be ear to ear.

The Extras
There are several special features on the disc including:

-Audio commentary with Pete Walker and DP Peter Jessop conducted by Steve Chiball, author of "Making Mischief: The Cult Films Of Pete Walker"
-"For The Sake Of Cannibalism" - An interview with Pete Walker by Elijah Drenner
-"Sheila Keith: A Nice Old Lady?" - A profile on the late actress featuring interviews with former collaborators
-Original theatrical trailer

The Bottom Line
This release isn't a FRIGHTMARE or even a nightmare, it is much closer to a dream come true. From the film that has always been excellent, to the new HD transfer that is the definitive home video presentation of the film, this is a must own.