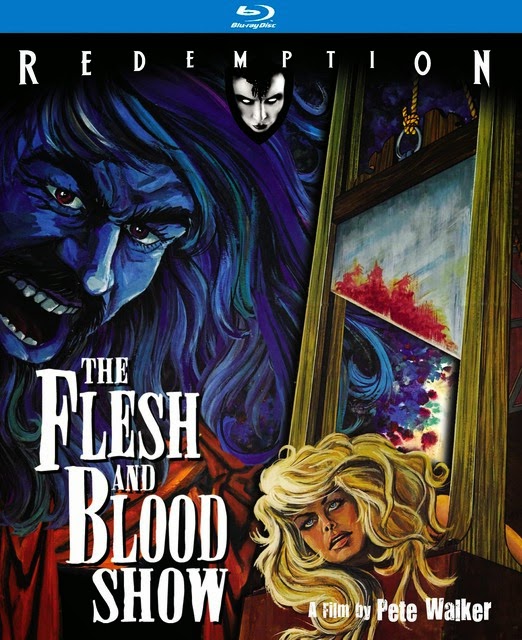 The Film
An aging seaside theater prepares to open its doors for the first time since a tragic performance of Othello. Now the actors and crew have moved into the theater to begin rehearsal on their musical comedy show but shortly upon moving in people start dying, apparently falling victim to the cursed theater. It takes a bit of investigating the theater's history and people around the area to get to the bottom of the bloody mystery that runs deep into a severely damaged psyche.

The back of this Blu-ray states that THE FLESH AND BLOOD SHOW is Pete Walker's homage to the Grand Guignol. It doesn't take more than a single viewing to cement that statement into fact. There is plenty of bloody horror on display, and even more flesh as girls run around naked like it is the latest trend. This is very much Pete Walker's gift to the slasher genre, almost a decade before the body count film really took off in the 1980s. It is artfully down however, and certainly not based around the plentiful tits and gore, which helped earn it an X rating from the British censors. The 3D sequence could be seen as a bit gimmicky but it aids in really hammering home the nightmarish aspect of the scene. When it is all said and done, THE FLESH AND BLOOD SHOW may not be Pete Walker's finest effort, but it will rank up there as one of most exploitative and deserves to be seen by horror fans everywhere.

The Audio & Video
Kino Redemption brings THE FLESH AND BLOOD SHOW to Blu-ray with a nice looking HD transfer. The 1.66:1 anamorphic transfer has fleshy skin tones and strong detail. The movie was filmed on location so there are some foggy exteriors. The print is in good condition with minimal scratching and wear. The 2.0 stereo audio track comes through loud and clear with no background noise. A simple yet effective track.

The Extras
-"Flesh, Blood, And Censorship" - An interview with Pete Walker
-3-D sequence in both Stereoscopic and Anaglyphic formats
-Original theatrical trailer

The Bottom Line
Another fine Pete Walker film given a loving restoration and release from Kino Redemption. Your collection will only benefit from adding this Blu-ray. Recommended, obviously.

THE FLESH AND BLOOD SHOW is available HERE