Probably going to be doing 2 days per post for the rest of the challenge, so here are days 18 and 19... 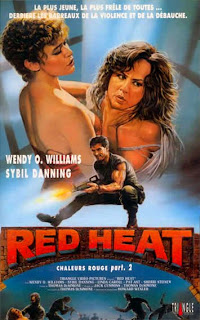 After watching Chained Heat I was in the mood for some more Women In Prison fare and decided to watch the other two movies in the triple feature DVD set with CH. RED HEAT was next, once again featuring Linda Blair in the lead role. When she is visiting her boyfriend in Germany she is kidnapped and sent to an East German prison where she has to deal with all the crap that comes along with it. It isn't until months later that her boyfriend finally discovers the truth of how she disappeared and sets to break her out. RED HEAT is a let down. The framework of a good WIP flick are there but the meat of it all is bland and boring. It never exploits the situation or East German setting enough and the ending is a set up for nothing. Not terrible but like I said, a let down. 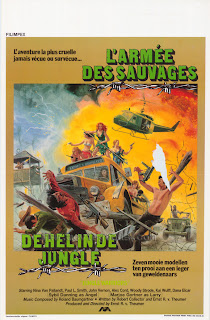 Rounding out that DVD set was JUNGLE WARRIORS, which brings the prison aspect in to the jungles of South America when a group of models on a photo shoot get captured by a drug lord. This is good old fashioned fun with cocaine... and barrels of it. A lot of shootouts, Woody Strode taking out people with a bow and arrow in the middle of a machine gun war, decapitations, naked women. It sounds like a lot of fun, and it is but the WIP aspect is lost amongst the shuffle of other things and that hurts it. 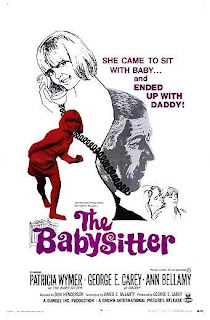 Day 18 was rounded out with THE BABYSITTER. This film from 1969 is the story of a DA in a loveless marriage who falls for the new babysitter. A fun loving, carefree spirit who just wants to have fun and listen to music. The fact that she's a young, leggy blond with a penchant for getting naked doesn't really hurt either. While the man and the babysitter have their fling they're being followed and photographed by a woman who is part of a biker gang that is going to use the pictures to blackmail the DA into letting her boyfriend and leader of the gang out of his murder charges. This movie was better than I expected it to be. There is some violence in the murder scene, some lesbianism and talks of blackmailing the DA by exposing his lesbian daughter (this is the '60s), potential pedophilia as I'm pretty sure the babysitter's age was never clarified and she could easily be a high school girl and tacos. Nothing to rush out of your way for as you pretty much get what you expect when you read the synopsis but it isn't as hammy as it all sounds so it is a worthwhile watch.

Day 19 sucked and booze wasn't going to save it. 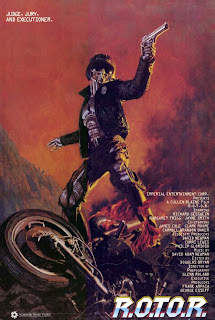 Early in the day I watched R.O.T.O.R., a killer robot cop flick from the late 80s. It could have been as cool as Chopping Mall but instead it was about as cool as getting prodded in the ass by robots. So bad it's good? So bad it's fucking awful. It wasn't the worst movie I've seen all month but it is among the worst. 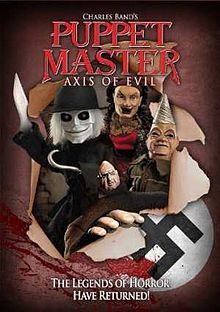 Then later that night I decided to give PUPPET MASTER: AXIS OF EVIL another viewing, hoping it was better than the first time I saw it when I was more than a few beers too deep. Well, I was relaxing with a couple beers, what I feel is the best recipe for a successful Puppet Master viewing, and I don't know if I could have been more bored. It is a shame too because I don't think the puppets move and look as bad as most people do, and there is actually some above average acting and direction for a Full Moon (especially modern day Full Moon) picture but pacing killed this thing, as there is none. Nothing happens until over an hour into the movie and even then it is so little that it just pisses you off. It wasn't as bad as ROTOR though.