THE BLOODY APE from 1997 was shot on Super 8 and involves a 400 pound circus gorilla going on a killing spree by violently ripping off limbs and faces... oh and dicks. He also likes to molest and full on rape women. And apparently this ape was so nice he could replace your father. If this movie teaches you anything it is that you should never piss off a gorilla handler or else he'll train his giant ape to kill you. The tag line on the cover says "100% Pure underground trash" and that is exactly right! From the ridiculous story and violence to the blatant tongue-in-cheek racism and tits everywhere, this is sleaze of the highest decree. Director Keith J. Crocker and crew obviously had a fucking blast making this movie and I had a lot of fun watching it... next time I think I'll enjoy it with some beers and make it even more fun.


And on the other side of the double feature was NIGHT OF THE LIVING DEAD: REANIMATED, which is pretty much exactly what it sounds like. This film gathers over 100 artists to recreate George Romero's classic horror film. Each artist used any method of animation they chose to create the scenes. From claymation and puppeteering to comic strips and stop motion. There are simple pen and inks and incredibly detailed paintings all working together to create this piece of work, which I have to say is pretty damn cool. Romero created a masterpiece back in 1968 and unfortunately it ended up in the public domain for all sorts of shitty companies to capitalize on it with their awful DVD presentations and shitty zombie movie "sequels" and "remakes" to use the NOTLD name, it is quite the breath of fresh air to see a project pay proper respect to the Romero classic while using the name. 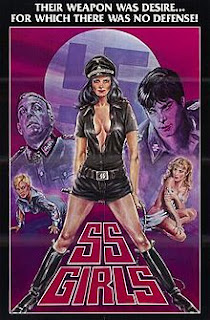 ...And back to the trash. SS GIRLS (aka Private House Of The SS) was next and my expectations were surpassed. It isn't difficult for that to happen within the nazisploitation genre as I find it to be one of the most disappointing genres in all of cinema history. Nazi themed exploitation should be a fucking hit 8 or 9 times out of 10 but instead it is usually a bore filled with lame characters, boring plots and poor filmmaking. SS GIRLS was one of Bruno Mattei's (Hell Of the Living Dead, Rats: Night Of Terror) first feature films and he delivers another entertaining romp in sleazeland. This movie is filled with naked women, a plot to uncover traitors within the 3rd Reich with those naked women, a lead character who is out of his fucking mind and lots of sex and death. As someone mentioned to me before this viewing, these characters are straight from a comic book, and it is pretty much true. The whole damn thing is nuts. And I like it. 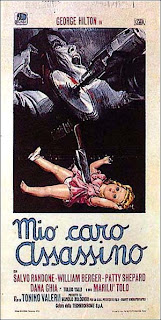 MY DEAR KILLER is my first giallo of the challenge but certainly won't be the last. There is no time wasted as the film opens up with a decapitation to lead us into the story and the detectives have to put together the pieces of the case from there. This is a nasty little film. With themes that include unending greed, pedophilia and of course cold blooded murder, this earlier giallo shows no mercy. If you can't handle what director Tonino Valerii is throwing at you he doesn't care. Almost everyone within this film has a secret they're hiding, or is just of questionable character in one way or another and the murder sequences are all great. From decapitation with heavy machinery to a circular saw there is no shortage of brutality on display. The writing is solid and the story pulls together well even if the killer is revealed to not be anyone who you would probably expect it to be. While this isn't a 1st tier giallo, it is a really good one that is worth checking out.