Day 7 was a story of a couple movies being subpar examples of their genre... I feel like that sort of extends to Wrestlemania 29 which I watched that evening... hmmm... Nevermind, at least Wrestlemania gave Daniel Bryan a win at Wrestlemania. 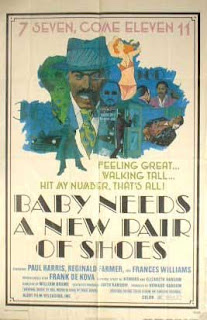 JIVE TURKEY aka BABY NEEDS A NEW PAIR OF SHOES is a rather lackluster and poorly written example of blaxploitation, a genre that has some truly great films. While JIVE TURKEY is one of the more bloody movies of the genre at times, the poor writing, lack of interesting characters and paint-by-numbers approach make it something only blaxploitation completists need seek out. 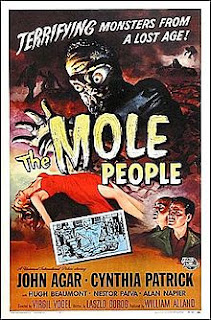 And then there was THE MOLE PEOPLE, the 1956 Universal Sci-Fi flick. I had high hopes for this one as any footage I've ever seen of it looked really cool. Well, most of that footage was of the mole people themselves, a mutant race that has been enslaved deep beneath the Earth's surface by a civilization of people that live off the mushrooms they force their slaves to harvest as they don't need light to grow and light hurts them due to how long they've been subterranean. A group of scientists discover this group by accident and are taken in as gods due to their ability to withstand light, and create it via flashlight, until they're discovered not to be gods and then they get in trouble and the mole people revolt. The end of the movie is cool, and there are some creepy and cool scenes with the mole people but overall THE MOLE PEOPLE was a slow, boring letdown.