Already 1/3 through the challenge... hopefully the next 20 days are filled with good movies a bit more consistently. 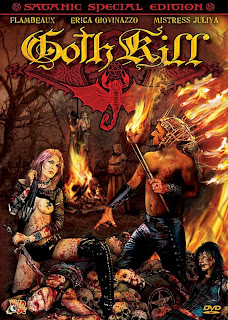 Most of the day was spent running around doing errands so I only had time for a couple of movies later in the day, with GOTH KILL leading it off. This low budget horror flick stars a bunch of New York City underground fetish performers according to the DVD case and an appearance from the queen of STDs herself Mistress Juliya from the Fuse TV channel. The premise of the movie is some dude with shitty head tattoos is an old Satanist who has transferred his soul to hundreds of bodies over the years waiting for his chance to claim his own dark kingdom and souls to reign over and ends up in the body of an innocent 19 year old girl who has just been brought in to the goth scene by her new roommate and he/she terrorize the local goth party scene in order to get his souls. Somehow this wasn't quite as awful as I was expecting. I wouldn't say it was good or that I came close to liking it but it was watchable and there will be a fan base for this movie that live for this type of movie. 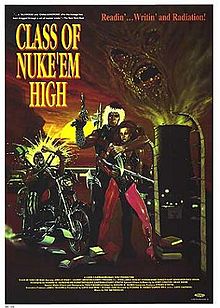 And then there was my first re-watch of the challenge, CLASS OF NUKE 'EM HIGH. It has been years since I've seen it but I've always held it among the best Troma productions and this was a reminder as to why. It is a (nuclear) blast from start to finish. Tromaville High School is right next door to a poorly managed nuclear power plant that is leaking all sorts of radiation and toxic sludge which gets into the water supply and begins messing with students. The Honor Society has turned from a bunch of straight-A do-gooders to The Cretins, a nasty gang of punks who sell drugs laced with the toxic waste. Eventually the waste mutates into a monster that terrorizes The Cretins and the school. This is pure 80s gold. Troma was spot on with this one, making an absolutely hilarious high school horror type flick that has stood the test of time for entertainment's sake. Having only seen bits and pieces of Part 2 and none of Part 3 I'm really excited to dig into them soon.

It's been a few years since I've seen them, but parts 2 & 3 of Nuke Em High are way sillier and not quite as good as the first one. Of course on the plus side, who can resist a giant nuclear squirrel.

I think I'll check them both out next week. As long as they're fun and entertaining they'll be okay. I've watched some much dreck this month so far that I'm getting burnt out really easily.