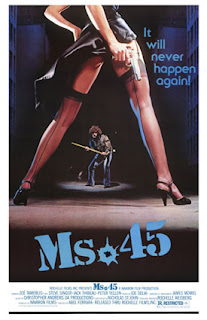 First up was MS. 45, the infamous film from Abel Ferarra (Bad Lieutenant, The Driller Killer). I have finally seen it and it was absolutely worth the wait. The film starts out not unlike other rape/revenge films, Thana is a young mute girl, working as a seamstress when she is viciously raped twice in one day. That is the seediness of New York City in the 70s and 80s for you, what a town. While Thana's first attacker gets away her second attacker meets the business end of an iron and then stuffed into the refrigerator to be disposed of slowly. Thana begins to not just take revenge on the men who attacked her, but any man who even looks at her in a breathtaking climax, this. This is what separates MS. 45 from the various other rape/revenge flicks that came before and after this. Thana wasn't out for revenge by the end, she had totally snapped and all men were a target. I want to write more on it but I'll save that for my next viewing. 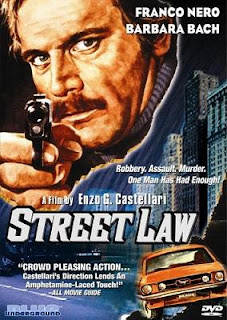 Enzo G. Castellari's STREET LAW was next, starring Franco Nero as an everyday working man who is running errands when he is beaten and kidnapped during a violent robbery. When the police fail to do anything about the case and find his attackers Nero takes matters into his own hands. First he manages to make underground contacts and set traps for the assailants to get arrested but when that doesn't work and the violence continues he is forced to fight fire with fire alongside his new friend in a nice staged finale inside a giant garage/hangar. I expected this to be more of a Death Wish styled revenge flick but it was more than that and was a nicely paced and well written thriller for the majority of the film.