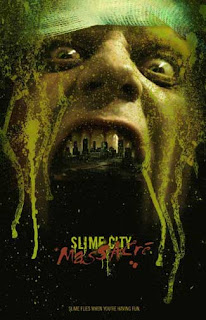 SLIME CITY MASSACRE started out day 6. I saw this movie in a FYE store for under $4 brand new about a week or 2 ago and figured it would be a good fit for this challenge so I grabbed it. This flick is about a group of survivors in NYC years after a dirt bomb went off who become posessed by the spirits of the dead after they drink from liquor bottles laced with their ectoplasm and become weird yogurty slime dripping monsters... sometimes. Does this sound more than a little bit like the brilliant Street Trash? Why yes it does, in fact the director of Street Trash, Roy Frumkes (also known for doing Document Of The Dead), has a role in the film and there is a cameo appearance by a bottle of Tenafly Viper. This movie certainly pays homage to the classic piece of trash horror cinema and it has all the makings of becoming a modern day cult classic. I badly wanted to think that highly of it. The problem is I just couldn't, to put it simply. For all of its positives, cool character design, a decent enough (if not totally original) story, it just feels like the cheapest Troma production, and not in a good way. The film tows the line between really fun B-movie and cheap straight to video garbage, without being either. So it could be worse, and I look forward to checking out more from these filmmakers to see if the potential comes to fruition because it is there. Also, I love the man, but attention low budget horror and trash cinema filmmakers: you don't have to cast Lloyd Kaufman in a bullshit role! 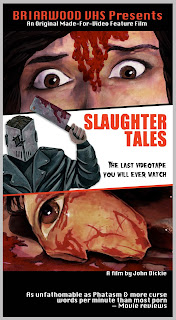 Technically I watched this on day 7 but SCM was feeling lonely and honestly, does it matter if this was a few hours after midnight? Not really.  SLAUGHTER TALES... I almost feel bad for not liking this movie. This is another zero budget anthology horror flick about a teen that steals a weird VHS tape called SLAUGHTER TALES and watches them. He isn't impressed with how crappy the films are but strange things begin happening to him and he is attacked in his own house. He has to destroy the VHS tape to stop the evil.This movie was made by Johnny Dickie who does almost everything from directing to acting and writing. It is pretty awful and the quality it piss poor. That said, he's fucking 14 years old and made his movie and got it distributed on DVD so applause must be given. Hopefully he sticks with it and becomes a great voice in the horror community because there was no shortage of passion and heart put into the project it just comes to down to the logistics of it all. Yeah the movie was bad but that is really a moot point in the larger picture of this kid... at least it will be if he continues to make movies and makes some good ones. Everyone has to start somewhere. Good job kid. Oh and believe it or not Lloyd Kaufman pops up at the end of the film... I think it was the universe telling me to fuck off. I'll take it universe, I deserve it.