Movies took a bit of a backseat to the Orioles home opener which is something I never miss watching each year, it is always a cool ceremony. One of these days I'll get there in person for opening day. 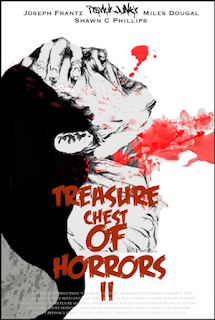 I was able to catch a couple flicks though, starting off with the soon to be released DVD of TREASURE CHEST OF HORROR 2 from Wild Eye Releasing. This is a Z-Grade anthology horror movie with most of the stories using the same cast in different roles. If you go into this movie expecting anything other than a movie you and your friends could make in your backyard, and anything except stupid tongue-in-cheek humor you're going to hate it and most likely turn it off. It is made on a zero dollar budget with awful acting and effects... but at times it is absolutely hilarious. This movie is dumb, but not always in a bad way. A couple of the segments had me rolling, namely Trendish and The Prom. Know what you're in for before you check this one out and if you like things like this it is worth a watch for some laughs. If this isn't your thing at all then I advise you to stay away. 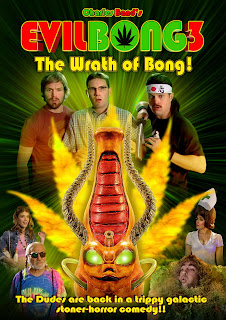 And while hanging out with a couple friends we threw on EVIL BONG 3, the only part of the trilogy I hadn't seen. I don't really care too much for the series. I think they each have their entertaining moments but there are plenty of other Full Moon movies I'd rather watch than these. Not very good overall, but my friend loves it and wanted to watch it like the Full Moon superfan he is and who am I to deny him?