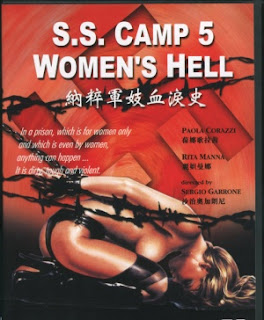 I was unbelievably exhausted all day and I don't really know why. Keeping my eyes open was a struggle so I figured I'd throw on something that is either going to surprise me or be so bad I just fall asleep. And I was surprised. SS CAMP 5 WOMEN'S HELL is a nasty little piece of nazisploitation from Sergio Garrone filled with naked women, conspiracies, whip and branding torture, shoot outs and metal spiked knuckles to the gut, in an especially brutal sequence. Who knew that it was possible to watch 2 nazisploitation flicks back to back and like them both (back to back being earlier this month...). I didn't think it could happen, but it did. Now, that isn't to say this movie is without its drawbacks, because it isn't. It is repetitive and the attempt at bringing real world atrocities into the fictional film just comes off as cheap to me. Maybe that was me being tired and it could change into a positive impact for the film on another viewing. From start to finish this is an above average piece of nazi exploitation. 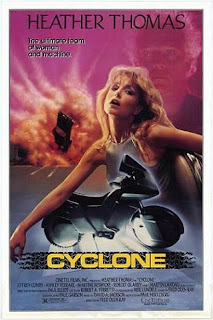 I followed that up with CYCLONE, a cheesy 80s action flick featuring Jeffrey Combs and Martin Landau. Combs plays a scientist developing a new military motorcycle filled with as much fire power as a F-16 and featuring some laser blasters for good measure. After he is murdered over the device he leaves it in the hands of his girlfriend to take care of and get it into safe hands. CYCLONE is very 80s, in a good way, and pretty entertaining. It is also frustrating that it doesn't go further in the action, sexiness, and overall concept of the movie. If this movie had taken a cycle of steroids before being made it would be a cult classic. As it stands it isn't bad, and is a decent piece of 80s action but it could have been so much more.